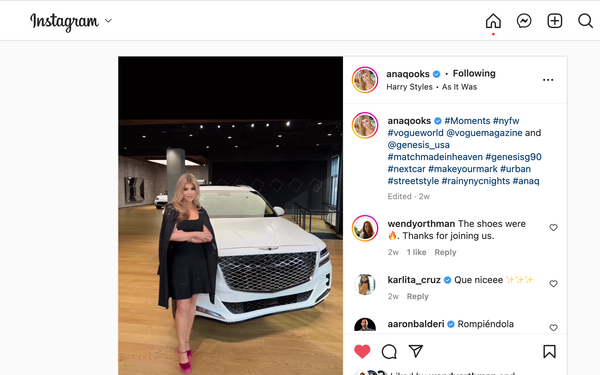 Luxury automaker Genesis was one of just three brands (along with Smart Water and Grey Goose) that viewers of the Vogue World livestream saw on Twitter before watching the star-studded fashion show, one of the hottest tickets during the recent New York Fashion Week.

More than 1.25 million viewers saw a cut-down of the Genesis G90 spot, which has the message “You can either buy into legacy or build your own. It’s time we reward those who make their own mark with a luxury vehicle that does the same.”

The word “Vogue’” was mentioned more times on the internet on Sept. 12 than any other day in 2022, and the 20-minute "runway show and fashion experience" exceeded all of Vogue’s seven-day viewership goals within the first 24 hours, including 54 million video views of global Vogue World content on social media.

Genesis is still a very young brand, having only been introduced a mere six years ago. Vogue, on the other hand, just celebrated its 130th year anniversary.

Vogue needs new eyeballs, which a luxury auto brand like Genesis is likely to bring. Genesis needs to get in front of the right kind of consumer, one that appreciates styling, which makes Vogue an equally good fit from its perspective.

“As a young luxury brand, we are actively looking for ways to connect with customer that are new and buck the traditions of luxury,” Genesis Executive Director of Marketing Wendy Orthman tells DriveTime. “We know they are passionate about design, fashion and curating their personal style. The opportunity to be part of the genesis of the Vogue World show and the livestream opportunity for the world to watch it and engage was a perfect fit for the Genesis brand.”

Beyond the video pre-event ad, Genesis had a fleet of Genesis vehicles, including G90s and GV80s, taking guests and influencers to various events throughout NYFW, including author Aimee Song, who has 6.7 million followers on Instagram.

Several VIP guests, including actresses Ana Quincoces, Holly Robinson Peete, Vivica A. Fox and TV personalities Derek Blasberg and Paul Wharton, arrived at the Vogue World show in Genesis vehicles, or were guests of the brand at the show.

Genesis also sponsored Monse’s NYFW show, which was attended by various VIPs who arrived at the show in Genesis vehicles. The automaker’s G90 campaign actually began with a #MakeYourMark event Aug. 10 at Genesis House in New York, where the brand announced the partnerships with Monse and Vogue.

“Conde Nast has been a wonderful partner for Genesis,” Orthman says. “They have many titles that connect with the passion points of our target customer, and their commitment to inclusion really connects to our brand. I cannot share what the future holds, but I believe this is the beginning of a beautiful friendship for our brands.”