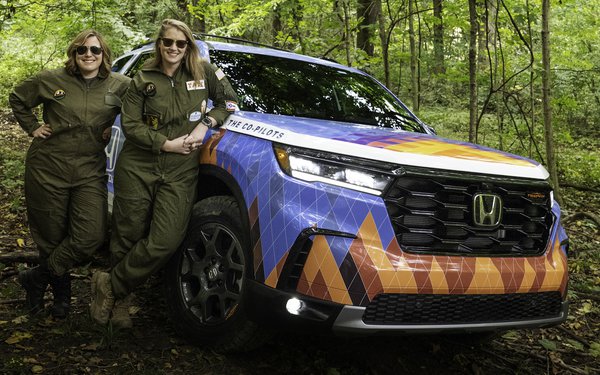 Honda, Nissan and Hyundai are among the automakers sending specially equipped vehicles to be used by teams participating in the arduous Rebelle Rally.

The 2023 Honda Pilot TrailSport, which the automaker says is the most off-road-capable Honda SUV ever, will make its first public appearance this weekend at the 2022 Austin City Limits Music Festival, which includes headliners The Future X, Flume and Kacey Musgraves.

Wearing a special wrap that celebrates the ruggedness of the all-new Pilot TrailSport, the three-row SUV will join the artists performing on the Honda Stage throughout ACL’s two festival weekends, Oct. 7-9 and 14-16, ahead of its full reveal later this year.

The Rebelle Rally is a challenging eight-day, all-women off-road navigation event. This is the fourth year Honda is participating in America’s longest off-road rally, which begins at Nevada’s Lake Tahoe and finishes more than 1,500 miles later at the Imperial Sand Dunes in Southern California.

Other automakers also sending teams include Nissan North America, which is sending the 2023 Pathfinder Rock Creek.

The SUV will be piloted by Team Wild Grace co-captains Sedona Blinson and Lyn Woodward, who are veterans of the event.  Nissan is the only manufacturer to participate in all seven editions of Rebelle Rally since its launch in 2016.

Hyundai is sending a Santa Cruz pickup modified to handle the extreme environment. It will be piloted by veteran automotive journalists Jill Ciminillo and Kristin Shaw, who are participating in the rally for the first time.

Sponsors of the event include Pirelli Tires, Mapbox, Jeep and Yeti.