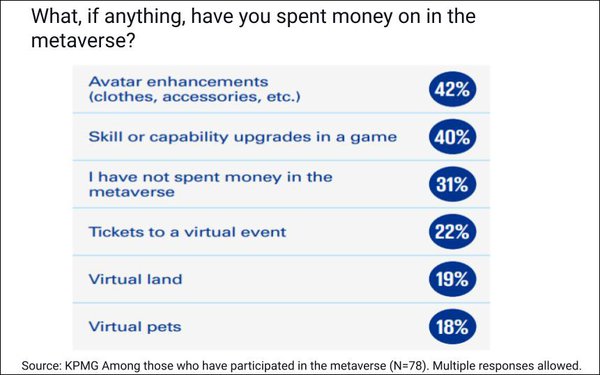 More than half (56%) of U.S. adults say they are aware of the metaverse — although just 8% have actually engaged with it, according to KPMG’s latest Consumer & Media report.

Claimed metaverse awareness is fairly high across generations: 66% among Gen Z, 65% among millennials, 53% among Gen X and 41% among boomers.  But boomers are even less likely to have used the technology: 2%, versus 12% of Gen Zs, 11% of millennials, and 5% of Gen X-ers.

The overall results point to growing, albeit still limited, interest in the metaverse and non-fungible tokens (NFTs), and somewhat cooling enthusiasm for paid streaming services, driven mainly by cost concerns.

Forty-three percent said they expect to participate in the metaverse in the next 12 months, with their current interest driven primarily by “potential to make money,” social experience/interaction, and enhanced gaming experience. 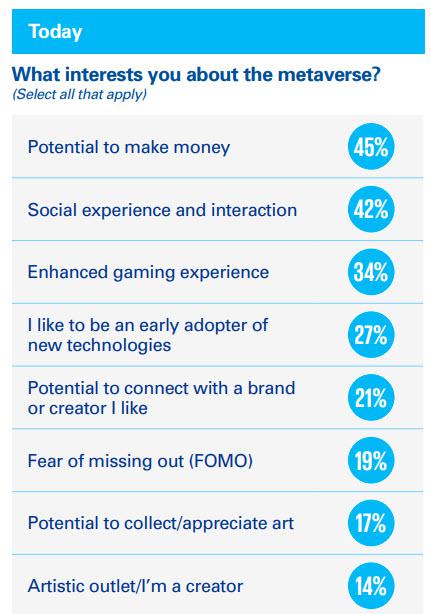 Asked what they envision using the metaverse five years from now, 24% cited shopping — but more cited “making money” (31%), watching TV/videos/entertainment (28%) and socializing with friends and family (27%). 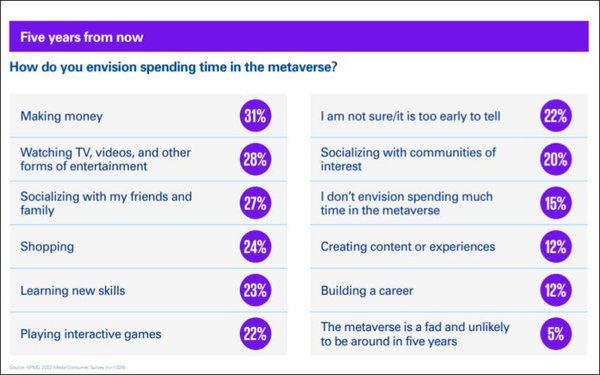 Further, among those who have participated in the metaverse, 31% said they’ve yet to spend any money there, and the rest report spending on virtual elements rather than real-world shopping (see top of page).

Regarding NFTs, half claim to know about them, 44% said they’re unfamiliar with them, and just 6% said they actually own one.

Among the owners, 73% said they had purchased an NFT in a marketplace, as opposed to a peer-to-peer transaction or minting a token themselves.

Twenty-three percent aren’t sure if they will buy/mint/sell NFTs in the next 12 months, but 22% said they’re likely to engage with NFT activity.

Again, the top reason to engage with NFTs is to make money, cited by 48%. That’s followed by potential use in gameplay (30%), desire to be an early adopter of new tech and potential to collect art (30% each) — and “potential to connect with a brand or creator I like” (29%).

On the paid streaming front, KPMG’s results indicate that the “typical” assumption that spending on streaming would be recession-proof may be proven inaccurate. (The survey focused mainly on paid services, rather than probing attitudes regarding ad-supported video-on-demand/AVOD or free streaming services/FASTs.) 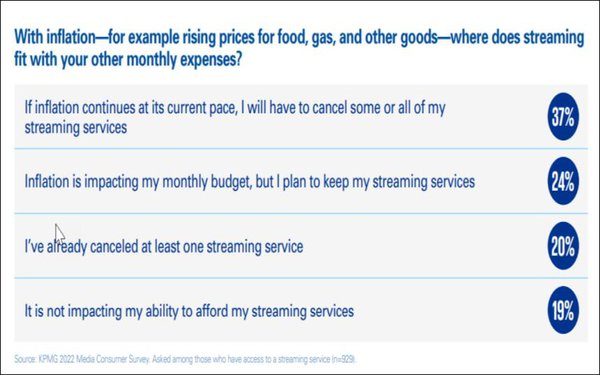 (These results seem to contrast markedly with another recent survey, by National Research Group, that found more Americans willing to cut back on many other items, including groceries, than their streaming services.)

Asked what they would change if they could change one thing about their streaming services, 37% cited price, versus 14% citing fewer subscriptions to manage (bundling options).

A small proportion (7%) said they would most like to have ad-supported options to lower costs.

On the other hand, 31% said that in 2022, they don’t plan to change their subscriptions, and their monthly spend on these is likely to stay the same, and 25% (more among younger respondents) said they actually plan to subscribe to more services.

Still, given that the current reported average monthly spend on the services is between just $20 and $30, attitudes could change if subscription prices shoot up, notes KPMG.

Only 15% of respondents admitted to password sharing (89% said someone in their household pays for their streaming subscriptions) — far fewer than most reports on this practice indicate (more than 30 million in North America).

However, in what may be a piece of good news for paid streaming services, of those who admitted sharing, 47% said they would switch to paying for their current services if necessary.