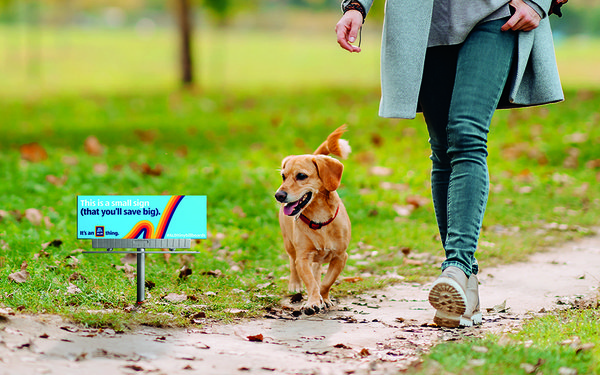 Aldi fans love it for its tiny prices. So as part of its new brand campaign, the grocer is deploying miniature interactive billboards, emphasizing its low prices in high-traffic areas in Atlanta, Dallas and Minneapolis.

The idea fits neatly within its mission of saving shoppers money, with a serving of sass on the side. The campaign invites shoppers to hunt for the wee billboards, then scan the QR code for the chance to win free groceries for a year.

"Aldi tries to break the system for its customers whenever it can -- that's why people love it so much," says Bob Winter, executive creative director at Leo Burnett, which created the campaign.  "We're trying to zig when everybody else is zagging in a way that's both quirky and charming."

The tiny billboards are precisely the opposite of what people might expect, he tells Marketing Daily. "That’s what makes it perfect for Aldi. It fits well with the brand's purpose."

The campaign is actually pretty big, with ten new billboards erected in each city each day of the campaign. And the grocer is supporting the OOH effort with social media support.

Aldi is a limited assortment grocer, based in Batavia, Illinois, with 2,200 stores in the U.S. (The parent company is based in Germany.) It's got a reputation for low prices, consistently coming in No. 1 for affordability in key industry rankings.

But even more so, it's got a reputation for a bit of zaniness. Weird items making their way into its seasonal center aisles, for example, have a life of their own on social media. And fans are so devoted they occasionally propose to one another while shopping.

"Aldi's fans are passionate. They're rabid,” Winter says. “And our job is to get more people to understand why -- because once they do, they're Aldi's friends for life."

He says the grocer has another small surprise up its sleeve, with a team of animated holiday gnomes standing by for a new holiday campaign.

That campaign will come to life via TV spots, social and radio.

"When people ask, 'How is it possible for Aldi to have all these amazing holiday products?' we decided gnomes are the obvious answer," he says.

The small creatures will make things happen behind the scenes "in delightfully unexpected ways."

Leo Burnett is also the agency behind the Keebler elves, introduced 50 years ago.