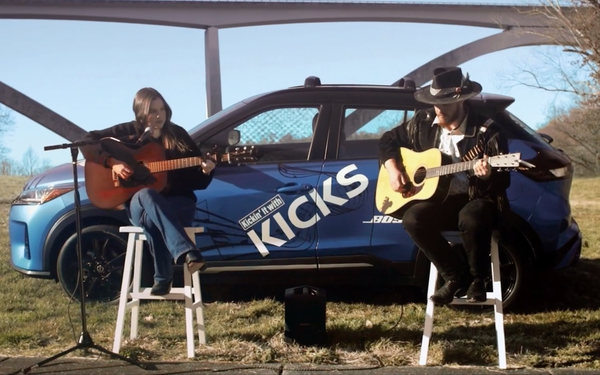 Nissan North America is launching a local effort, "Kickin' It with Kicks," to help aspiring musicians near its U.S. headquarters break into the industry.

The automaker has chosen six students in the Nashville area majoring in music or performing arts to receive tools needed to help create their own music videos.

Students participating in the campaign will be offered use of a branded Nissan Kicks crossover SUV and a Bose S1 Pro portable Bluetooth PA speaker to create memorable performances throughout Nashville.

Once all six have completed their video, Nissan employees will vote on their favorite, choosing one winner who will receive $1,000 that will go toward their education.

One of the chosen musicians, Gloria Anderson, has already posted her video on YouTube. The first 30 seconds shows Anderson checking out the vehicle and pointing out some of its musician-friendly features.

Anderson and her bandmate are then shown sitting in front of the Kicks where they play “Like She Does (The Car Song)” about an old Nissan she used to own and the memories it evokes.

Consumers can find the latest artists and performances by following #KickinItWithKicks on social media.

Ever since Nissan moved its U.S. headquarters from Los Angeles to the Nashville suburb of Franklin, Tennessee in 2006, the automaker has been tied to the music industry, says Nick Reese, director, chief marketing manager for Nissan's CUV/SUVs.

"We try to bring some of that emotion into every product we produce," Reese says in a release.