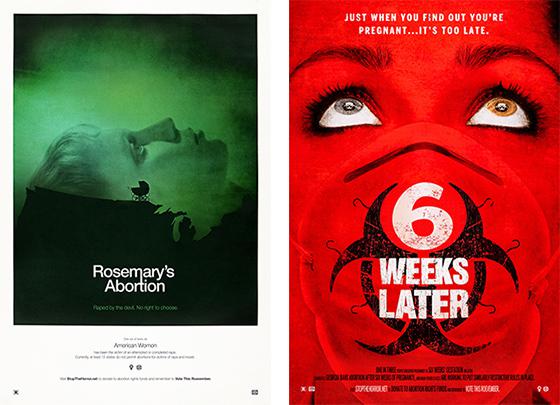 "It certainly feels like we are living in a horror movie right now and a really scary one," says Ruth Bernstein, YARD's CEO and co-founder. "We wanted to do something to use our voice this November."

The out-of-home and digital campaign rewrites ads for six classic horror flicks, each showcasing a different nuance of reproductive healthcare. For example, a "Carrie To Term" poster has this tagline: "Terror strikes on non-viable pregnancies."

"Invasion of the Female Body-Snatchers" reminds readers that "86% of women believe abortion should be legal, at least in some circumstances."

And in "Six weeks later," copy adds, "Just when find out you're pregnant… it's too late."

All end with a plea to "Stop the horror, and 'Vote this Roevember.'"

Posters will be spread through five New York City neighborhoods, with QR codes driving traffic to a campaign microsite. There, readers can learn more about and find their way to voter registration materials and donate to Planned Parenthood.

Bernstein says protecting abortion access has "galvanized" staff at the female-founded, female-led shop. "We couldn't look away from this issue."

Combining the awareness effort with Halloween's horror season made a natural fit to keep the issue top-of-mind heading into the elections. "We just felt 'Stop the Horror' would mean so much more this year."

Bernstein hopes the campaign will ignite conversations about what is, she believes, a deeply nuanced issue. "I don't think enough people come together for discussions and debates, and abortion isn't as divisive as most people think it is. We wanted to surprise people with this approach and get them talking," she says. "The more you can do to ignite debate and discussion, the better."

With each poster highlighting a different facet of abortion, "there are six potential discussions. This isn't a one-size-fits-all problem, and there's not enough of that nuanced discussion."

It's not the agency's first pro-bono effort supporting women. On the first Mother's Day of the pandemic, it ran a campaign called "Leave Mom the F*&k alone."