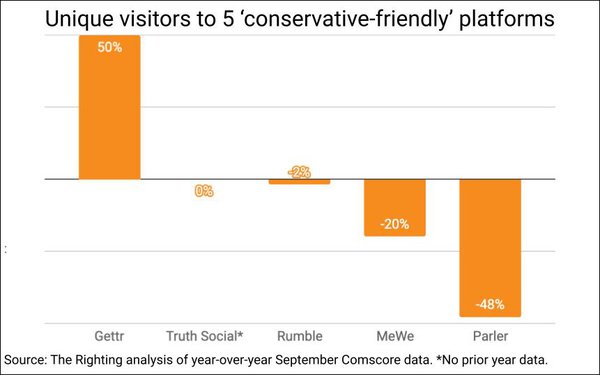 Most conservative web sites suffered traffic declines in September -- particularly Foxnews.com, which continued to hemorrhage for the seventh straight month, taking a 23% hit, according to TheRighting.

The only sites to see improvement among the 20 studied were Washington Examiner and Epoch Times, TheRighting reports, based on Comscore data.

Despite its attrition, Fox still ranked as the most trafficked right-wing website with nearly 74 million unique visitors.

The winners in September included:

Polskin adds: “The  big news events of September 2022 such as DeSantis sending immigrants to Martha’s Vineyard and Hurricane Ian failed to produce a surge in unique visitors. However, the midterm elections should drive more eyeballs to all news websites next month.”