How Eos Translated Effortless Swearing Into A Culture Of Risk-Taking 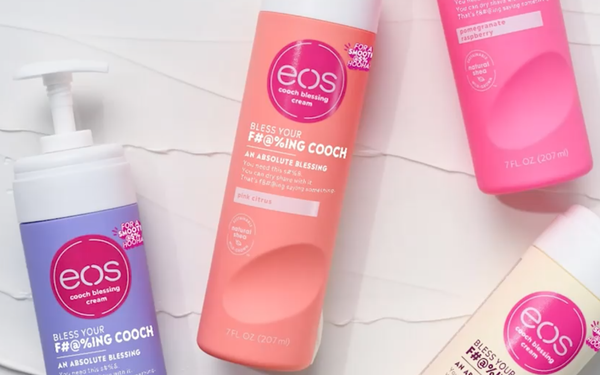 Salty conversations about female body parts might not seem like the most likely road to a stronger marketing culture. But for Eos Products, its viral "Bless Your F*ing Cooch" success paved the way for 15 months of bigger risks -- and it made the company braver in how it talks to the TikTok-loving Gen Z and millennial audience.

"Creativity truly can be the rocket fuel to maximize acceleration and growth," said Soyoung Kang, chief marketing officer at Eos Products. But in the case of its shaving products division, it also took light-speed decision-making, a TikTok gift from the marketing gods and plenty of guts.

In a talk called "Evolving with Creativity," she told attendees of this year's ANA's Masters of Marketing conference how the company turned Gen Z buzz into increased market share and hundreds of millions of social-media impressions.

And in the process, it doubled sales at its shaving division.

When Kang started at Eos four years ago, it was (and still is) best known for its little egg-shaped lip balms. Still, it struggled to keep its hold on young shoppers who were both more discerning and less loyal.

So Kang started listening intently on social media. "I'm a big believer that marketing magic exists in the overlap between consumer and product truths. So it's imperative that we discover the authentic role that our brands and products can play in people's lives."

While conversations on social often talked about Eos shaving products leading to softer, smoother skin, "we noticed that a lot of people were specifically talking about their nether regions. It was amazing how much people are willing to share about private parts in very public forums."

Kang sensed an opportunity. "We did the clinical testing to get regulatory approval for use in your private parts. We redesigned all of our product packaging to showcase our new gynecological claims. We laid the groundwork for a very careful messaging strategy for the first campaign in years for our shave collection."

But then, an influencer named Carly Joy changed everything. In a TikTok post raving about Eos, she called the product "a f*ing blessing" for her "cooch," said it led her to one "smooth-assed hooha."

Within three days, Eos and Mischief, its agency, had connected with Carly Joy, introducing a limited-edition "Bless your F*ing Cooch" cream in that time.

While it ultimately led to sold-out products and through-the-roof shares and likes, the success wasn't just from frisky language, Kang noted. The point is that people wanted instructions about shaving their body parts.

"People were grateful for the clear and easy-to-follow educational content. We were adding value and [were] entertaining at the same time," she said. "That's a magical combo we discovered our audience loves."

That campaign soon led to another risk-taking effort called "Vagnastics."

The fun spoof of aerobics instructors illustrated just how tricky it is to shave your privates. "It blew away our performance benchmarks and was so successful across full-funnel metrics that we ended up running it for twice as long as we had originally planned," she said.

While this campaign broke new barriers too, "it was much easier to create because we had done the Cooch campaign first."

Eos' next leap involved an Earth Day partnership with an organization turning hair, which is biodegradable, into a way to prevent soil erosion. "Pubes for the Planet" encouraged users to send in their hair, which it turned into a "Pubes Park" in San Francisco, rewarding participants with a free tube of Eos product.

Kang said the campaign generated more than 115 million earned media impressions and monetary donations for Matter of Trust, the nonprofit it partnered with.

Meanwhile, the company's latest campaign continues to break new ground, celebrating all the unusual body parts people like to shave, from forearms to toe knuckles. "We're all united by body hair," she said.

The biggest lessons from the last 15 months?

"We learned our audience appreciates real talk, and that we can win in the fight for attention when we're authentic and funny. I've learned that every good marketer needs to find the edges of comfort within their own organization -- and respectfully push on those edges."