In Letter To Advertisers, Musk Vows Twitter Won't Be A 'Hellscape' Or 'Spam' 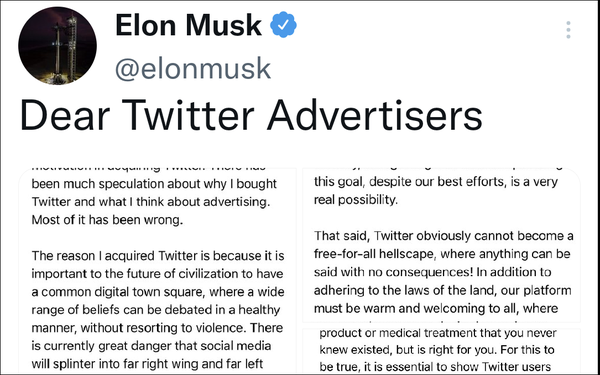 "I wanted to reach out to you personally," new Twitter owner Elon Musk says ironically in an open letter to the ad industry posted as a tweet -- not necessarily DMed to any ad execs -- to set the record straight on "why I bought Twitter and what I think about advertising," going on to state that "Most of it has been wrong."

The tweet ironically followed one posted late Wednesday of a video of Musk carrying a "kitchen sink" into Twitter HQ, implying the obvious metaphor that much of old Twitter will go except for it, including much of its labor force.

Citing recent reports that Musk's Twitter plans to lay off as much as 75% of its workforce, GroupM Global President of Business Intelligence Brian Wieser said: "There's no way that is not meaningfully negative for Twitter's ad business" in his weekly "This Week Next Week" podcast, noting: "The money just doesn't continue to show up when you cut back by that much. And so the money will flow somewhere."

Wieser suggested that rival social platform "Snap can be a real beneficiary," because of its emphasis on brand safety.

And that may be the main reason for Musk's letter to the ad industry this morning, because includes a promise that, "Twitter obviously cannot become a free-for-all hellscape, where anything can be said with no consequences!," though it wasn't entirely clear whether he was referring to toxic tweets and hate speech, or advertising content itself.

"I also believe that advertising when done right, can delight, entertain and inform you; it can show you a service or a product or medical treatment that you never knew existed, but is right for you," he writes, adding: "For this to be true, it is essential to show Twitter users advertising that is as relevant as possible to their needs. Low relevancy ads are spam, but highly relevant ads are actually content."