“We are monitoring Twitter’s actions, such as setting up a content moderation review panel, and assessing their design, governance, and potential to improve implementation of digital media safety best practice,” GARM said in a statement, adding: “We will share these views with members, as we have with previous events.”

Twitter has been a member of GARM since its founding in June 2019, in which members pledged to improve digital media by removing “harmful content online.”

In a letter tweeted to Musk, GARM Initiative Lead Robert Rakowitz stuck a more collaborative tone -- noting not once, but twice that GARM “has high hopes” for Musk’s ownership of Twitter, citing the innovation he has brought to some of his other ventures.

“Transparency and control over the underlying technologies that power platforms is a right (a choice as you frame it) that we should back in the hands of users, creators and advertisers,” he continues, adding, “A new industry-defining standard can be set here, and we’re eagerly awaiting to see how Twitter can uniquely answer this. Platforms should be safe for all, and suitable for advertisers. For advertisers, this is non-negotiable – and we expect Twitter to uphold its commitments to GARM.”

There was no public reply from Musk at press time. 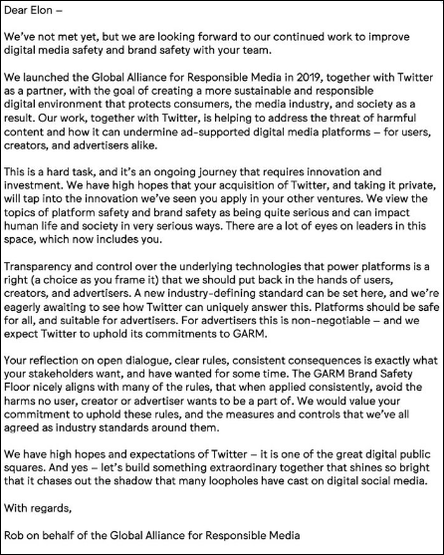