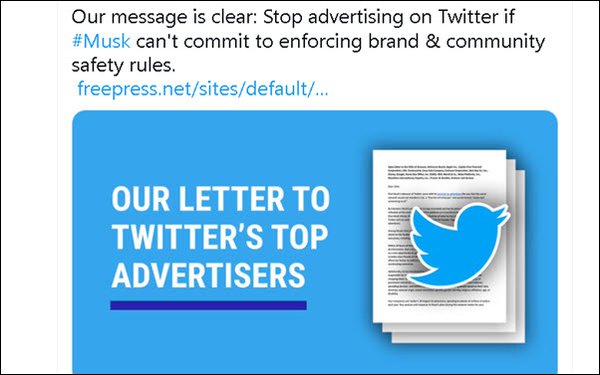 Interpublic Group (IPG) and Havas Media have advised their clients to pause advertising on Twitter, citing brand safety concerns based on the actions of new Twitter owner Elon Musk.

Meanwhile, 40 social advocacy and tech watchdog groups sent a letter to Twitter’s 20 largest advertisers — which will collectively spend an estimated $238 million on the platform this year — urging them to pressure Musk to continue Twitter’s content-moderation practices and suspend their Twitter advertising if he refuses.

Days after Musk’s closing of the $44-billion acquisition that took Twitter private, “The current situation is unpredictable and chaotic, and bad actors and unsafe behaviors can thrive in such an environment,” IPG wrote in an email reviewed by The Journal.

Research was already showing “a rise in appropriate behavior” on the platform, and it is “reasonable to expect that bad actors may feel emboldened given Musk’s statements about being a free speech absolutist and his more recent sharing of conspiracy theories,” the agency warned.

“At this moment, we cannot confidently state that Twitter is a safe place for brands,” IPG concluded, offering to help clients with non-cancelable Twitter contracts to modify the terms.

Havas cited concerns about Twitter’s ability to monitor the platform’s content, according to the report.

Other agencies are taking a wait-and-see attitude about Twitter, WSJ confirmed.

Twitter — which has reportedly been reaching out to advertising buyers for meetings to clarify its policies and intentions —declined to respond to the WSJ report.

On Sunday — just days after Musk tried to reassure advertisers, claiming that Twitter would not become a “free-for-all hellscape” under his ownership — he helped spread false conspiracy theories about the attack on the husband of Speaker of the House Nancy Pelosi, Paul Pelosi, by tweeting out a link to an article in a site known for publishing false, right-wing misinformation.

On Monday evening, Yoel Roth, Twitter’s head of safety and integrity, posted tweets claiming that Twitter was focused on addressing a “surge in hateful conduct” on the platform, and had already removed more than 1,500 accounts and reduced “impressions on this content to nearly zero.”

Also on Monday, Sarah Personette sent an email to major ad buyers stating that Twitter’s policies hadn’t changed and that  Musk was “deeply engaged in product and engineering,” according to WSJ. “He wants to ship exciting things, and he wants to do it quickly,” she added.

On Tuesday, Personette revealed in tweets that she had resigned last Friday, without specifying her reasons.

"We, the undersigned organizations, call on you to notify Musk and publicly commit that you will cease all advertising on Twitter globally if he follows through on his plans to undermine brand safety and community standards including gutting content moderation," wrote the groups, which include the NAACP, Free Press, Public Citizen, Public Knowledge, the National Hispanic Media Coalition, the National Center for Transgender Equality, The Tech Oversight Project and The Real Facebook Oversight Board, among others.

"This means that Musk must not roll back the basic moderation practices Twitter already has on the books now and must commit to actually enforcing those rules."