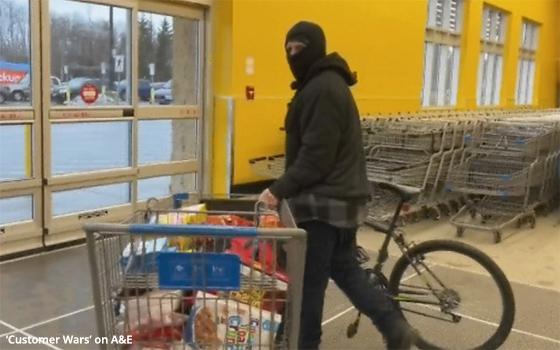 Hell is other people? The answer to that question would appear to be yes, according to a new curated-video series, “Customer Wars,” premiering Tuesday on A&E.

The show collects video from the front lines of the retail, fast food, ridesharing and airplane travel industries where those employed in public-facing jobs are dealing increasingly with customer tantrums, violence and incidents of large-scale shoplifting.

An introduction to the show claims that tempers in public places are shorter than ever due to “labor shortages” and “supply-chain woes” that have led to “a 40% rise in retail crime.”

No sources for these conclusions and data are cited in the show. But at the same time, news reports of large-scale shoplifting impacting drugstore chains, big-box stores and other retail categories have been frequent in the last two years or so. And some of us have even witnessed these robberies firsthand.

In the premiere episode of “Customer Wars,” video footage from surveillance cameras and bystanders’ iPhones captures a woman threatening other shoppers with a knife and then getting tased by police; a man returning to a barber shop who angrily demands his money back because he hates his haircut; at least two airport tantrums; and a drunk, racist passenger in a rideshare car who spits on the driver.

Fact is, the intensity of these incidents can make the show uncomfortable to watch. It is upsetting to see people who are obviously emotionally distressed, possibly mentally ill or strung out or inebriated who are caught in the act of doing things -- criminal or otherwise -- that at least some of them will regret later.

For example, the woman who was tased was a meth addict who was under the influence when she brandished a knife in that superstore.

In another segment (pictured above), a man tries to leave a big box store in Canada with a shopping cart full of groceries he did not intend to pay for.

He is met at the door by a feisty, 73-year-old woman who berates him and forces him to release the shopping cart and leave the area empty-handed.

At first glance, he seems like a recalcitrant criminal. But at second glance, a peek into his shopping cart reveals ordinary groceries such as a box of Cinnamon Toast Crunch cereal.

Since it is doubtful that he plans to sell the cereal on some sort of black market, you get the feeling that the man may be in dire straits, perhaps unemployed and desperate enough to steal groceries to feed his family. We learn from the show that he was later arrested.

For the most part, “Customer Wars” takes a scattershot approach to its video curation -- jumping from shoplifters and drunks to a dissatisfied salon customer and, in one scene, a woman who climbs into a fast-food kitchen through the drive-up window to confront the restaurant’s employees.

It cannot be determined from the show if the U.S. and Canada are really in the grips of a retail violence pandemic.

But as we already know, people today are stressed. It stands to reason that some of them will eventually reach their breaking points.