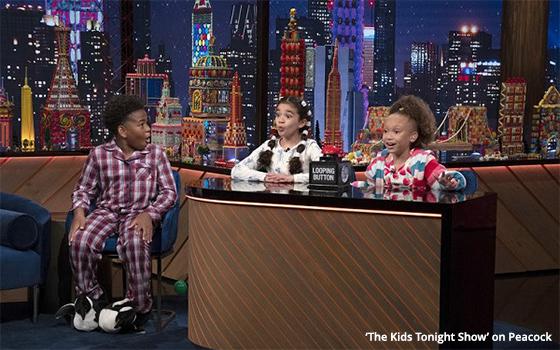 A new children’s “Tonight Show” on Peacock is a good example of how a TV company can take advantage of the watch-anywhere, watch-anytime nature of streaming to devise new content based on an old brand.

Although the new show -- formally titled “The Kids Tonight Show” -- carries the name of TV’s best-known late-night show, the kids’ version is being produced for Peacock, which means kids can watch it anytime.

Thus, it is not really a late-night show (and nobody is saying it is). Nor does its “Tonight” designation actually mean anything, except to signify that it is meant to mimic the NBC late-night show from which it has been adapted. It is reasonable to assume that most children will watch this show long before 11:30 p.m. (Eastern).

“The Kids Tonight Show” started streaming on Peacock on October 14. It is produced in New York at 30 Rock in Studio 6B, across the hall from Studio 6A, the home of “The Tonight Show Starring Jimmy Fallon.”

Fallon, Lorne Michaels and seven others are credited as executive producers of “Kids Tonight.”

The kids’ show features four rotating co-hosts who host the show two at a time. The four are all professionals with a number of entertainment credits under their belts.

Recker Eans, 11, is a drummer with his own band, The Twits, who created an original song -- “We Are the Future” -- which was featured in a Gap ad campaign.

Nine-year-old Mykal-Michelle Harris has been performing since she was 3. She has been seen in TV shows such as “Big Little Lies” and “The Affair.”

Olivia Perez, 11, was in the movie version of “In the Heights” and has been seen in ads for Puma, J.Crew and Zara.

Twelve-year-old Dylan Gilmer is a rapper who has had his own show on Nickelodeon since 2020 produced by Tyler Perry -- “Tyler Perry’s Young Dylan.” One of the show’s writers on “Kids Tonight” is 16-year-old Mykey Cooper from Philadelphia.

As a show designed for kids, it is only natural that the show is childlike. But so is the show from which it has been spawned, Jimmy Fallon’s “Tonight Show.”

The Fallon “Tonight Show” has long featured a variety of stunts and comedy bits in which the show’s celebrity guests agree to participate (either willingly, or I suspect, under duress).

Some long-time observers of the Fallon show think these bits are childish. Others seem to like them, so they go on.

However, these suitable-for-children bits now have a secondary use. They are being repurposed for “The Kids Tonight Show.”

“Viewers will get next-generation interpretations of all the beloved Fallon bits, celebrity interviews and signature late-night fun for kids and the whole family,” says a Peacock press release.

“The Kids Tonight Show” on Peacock consists of two new shows produced and dropped every week.

No word has come out of any other networks about the development of kids’ versions of “The Late Show With Stephen Colbert,” “Jimmy Kimmel Live” or “The Daily Show.”

Something the TV Blog would love to see: A new round of late-night wars in which the co-hosts of “Kids Tonight” are poached by the kids’ versions of these other shows. I’m joking, of course, but anything’s possible.