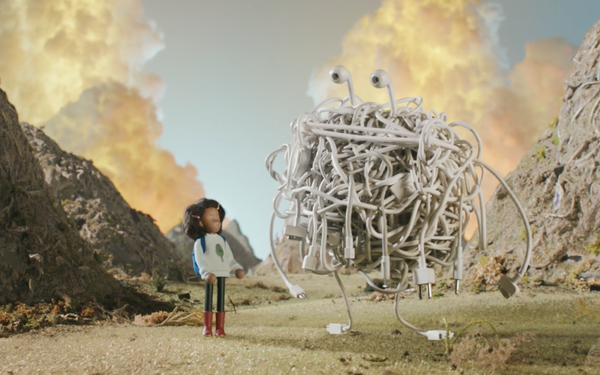 Back Market, a company that offers accessible pricing on quality devices as a sustainable alternative to buying new tech, kicked off its “Tech Reborn” campaign with the 30-second “The Monster” spot.

The creative, produced by Nexus Studios, uses a combination of stop-motion animation and puppetry. It playfully shows our dependence on tech and how revamping existing tech can secure longer usage. Created with discarded charging cables, the Monster represents the disconnect society faces and the change to change course.

"The Monster" ad will be placed in premium video and social placements across the YouTube Masthead and Vevo, as well as Hulu and broadcast TV during the NFL games, Thanksgiving Day Parade and Christmas in Rockefeller Center.

The ad campaign hopes to expand Back Market’s reach in the U.S. just in time for the holiday season.

“The story of The Monster asks us to reflect on our own buying habits and challenges the belief that you have to sacrifice something when buying products that have a lower impact on your wallet and the environment. Back Market believes we should do more with what we already have, an idea shared through the tale of a monster who sees that ‘new’ isn't always better,” said Woody Wright, head of U.S. marketing, Back Market.

The company operates in 16 countries, including the U.S., France, Germany, the UK, Spain, Japan and across Europe. Some 25% of people in France have purchased their phone from Back Market.