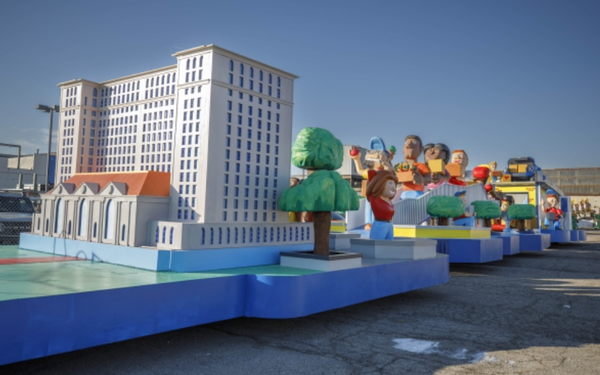 Ford Motor Co. is sponsoring a float in the Detroit Thanksgiving Parade.

Themed “Powering the Community,” it aims to show the automaker’s impact and innovation, from its community investment to restore Detroit’s Michigan Central train station, to the F-150 Lightning electric pickup truck.

The new float, which is more than 100 feet long, was designed and built by Parade Company artists.

The first section features an illuminated replica of the reimagined train station which is part of a 30-acre hub. The automaker is joining with Google, the State of Michigan and the City of Detroit to advance new technologies and skills programs.

The middle section demonstrates how Ford, and its partners, plan to activate spaces for the community in and around Michigan Central.

The third section, the focal point of the float, showcases the role Ford’s community centers play in providing access to food and other resources for local neighborhoods in Detroit.

The moving lights along the float’s bridge represent the flow of electricity and power source the F-150 Lightning can provide. The people carrying boxes throughout the float represent the thousands of Ford employees that help distribute food and volunteer in communities in the city and across Metro Detroit each year.

The parade is featured annually on Detroit’s NBC affiliate and a one-hour syndicated national broadcast reaches more than 185 television markets across the country.

Earlier this year, Ford announced the extension of its commitment of world-class Parade Company events through 2024.