In a minor tweetstorm overnight, Musk also asserted Apple has threatened to remove Twitter's app from the App Store and simultaneously characterized Apple's 30% commission on revenues generated by app developers distributing through the App Store as a secret "internet tax."

That prompted followers to fact-check Musk, noting that Apple disclosed that policy when it launched the App Store in 2008 and it is a well-known and common practice used by other app distribution platforms worldwide.

All of the assertions are ironic, given that Apple is a private company exercising its free-speech rights to advertise where and when it wants, and to do business with whomever it wants -- or not.

They also are ironic because one of Musk's first decisions since taking control of Twitter was to create a policy of "freedom of speech, not freedom of reach," including throttling the reach of users it deems inappropriate, "deboosting" and "demonetizing" them.

Other ironies abound, but perhaps the biggest of them all is that Musk keeps asserting that Twitter is trying to save free speech, even as he has been trying to charge users $8 a month in order to speak it, and definitely to generate any reach from it.

There's so much conflation in Musk's logic that I don't know were to begin, but let's start with the fact that what Apple is actually doing is exercising its commercial free speech as part of a marketplace based on on free enterprise.

He just doesn't like the fact that it is being targeted at him, because he has made what many believe to be reckless decisions that have spurred big advertisers and their agencies to hit pause on Twitter advertising.

So I guess Musk is implying that those companies -- Apple, which spends $100 million a year advertising on Twitter, other top Twitter advertisers, or agency holding companies including Havas, Interpublic, Omnicom, Publicis and WPP -- are also somehow harming free speech, by exercising theirs?

Musk would have a more legitimate claim if Apple actually were to ban Twitter from the App Store -- but not for free-speech reasons, just free-marketplace ones.

But as a developer who has had firsthand experience with Apple refusing to distribute his app, I can tell you its policies and decision-making are those of a private company, not a constitutional right. Just like Twitter's are.

Musk can characterize that as "censorship," but it's just a free marketplace. 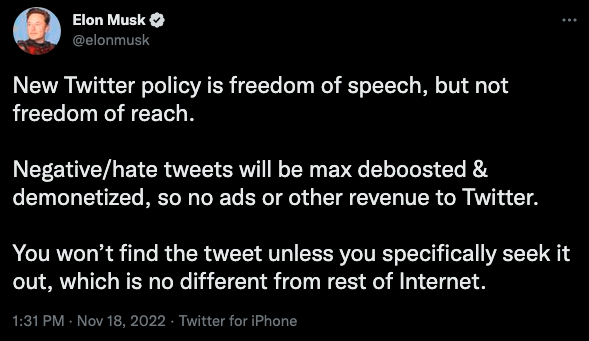