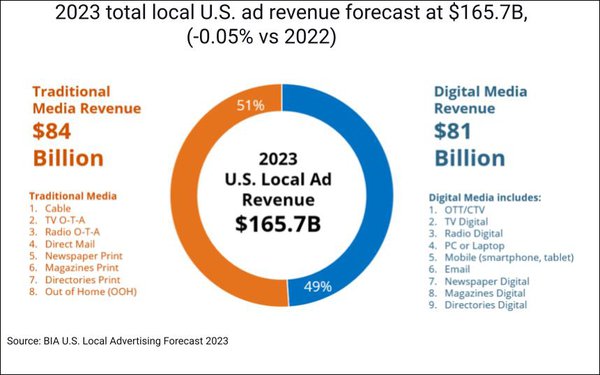 Advertising revenue across local U.S. media will decline by 0.5% in the coming year, projects the latest forecast from BIA Advisory Services.

The projection, which spans 16 media and 96 sub-verticals, calls for $165.7 billion in total revenue. That compares to a final estimate of $166.5 billion for 2022, which was buoyed by heavy midterm elections ad spending.

BIA has decreased its digital estimates slightly in the last two forecasting rounds because opt-in privacy measures on Apple and Android devices have had some impact on mobile advertising growth (although local is still projected to grow by 8.1% in 2023).

When political advertising is removed from the comparison, the total local TV projection is $18.2 billion—up from $17.6 billion sans political spend in 2022, and $17 billion in 2021.

However, direct mail’s growth has been slowing substantially due to rising costs and growth in digital advertising channels. Direct mail growth for 2023 is pegged at just 1.5%.

In addition to a 78% drop in political advertising, verticals forecast to see significant declines include leisure and recreation (-4.9%) and real estate (-1%) recent).

“When it comes to advertising in the business vertical market, education offers a tremendous opportunity for local media in 2023, with companies offering opportunities for employees to improve their training and with people who are experiencing a job transition often enrolling in classes to advance their education,” noted Nicole Ovadia, vice president forecasting and analysis, BIA Advisory Services.

Other verticals are likely to show faster improvement if the Federal Reserve board slows or ceases interest rate increases and economic conditions improve, she pointed out, adding: “Even with the economy in flux, the continuing strength of the labor market and corporate profits makes me feel confident that key verticals will show growth in the year ahead.”