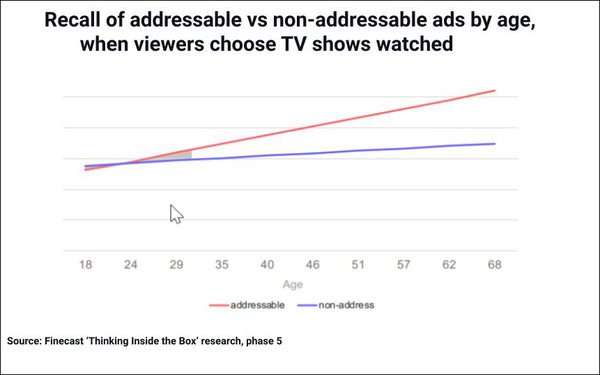 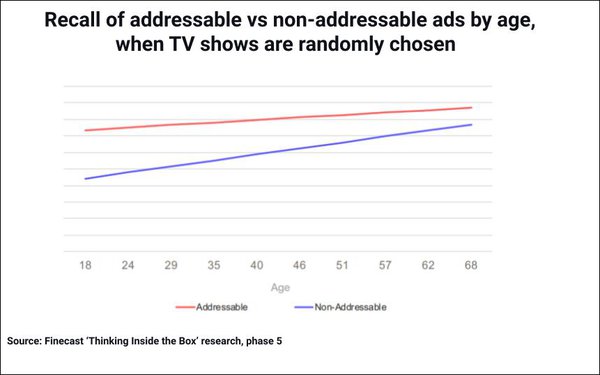 As various groups work to accelerate widespread implementation of addressable television, the targeting method continues to get periodic infusions of supportive findings from “Thinking Inside the Box,” a multi-phase research initiative spearheaded by Finecast, GroupM’s U.K.-based addressable TV platform.

For starters, the latest studies confirmed previous Finecast research showing that addressable ads are consistently correlated with higher levels of viewer attention. Not surprising, since it makes intuitive sense that people pay more attention to ads that are relevant to them.

Another key finding: Watching addressable ads — ads that are, again, in line with their interests — elicits stronger emotional and reward responses.

Addressable ads also result in higher recall than non-addressable ones, showing a 10% increase in accuracy, as well as faster response time.

They’re also better-recalled, across age groups, in any context — including whether or not the viewers have chosen the shows being watched (charts above). That was tested by having viewers watch addressable and non-addressable ads within TV shows that they selected, and within randomly selected shows.

If brands needed more encouragement to start experimenting with how addressable TV works best within their own marketing strategies, the study results would seem to provide pretty sound rationales.

“We found compelling evidence that addressable ads exert a robust effect on viewers, influencing both their neurological and behavioral engagement,” summed up Joseph Devlin, professor of cognitive neuroscience at University College London. “The ‘addressability uplift’ effect is noticeable in all four brain networks.”

“Viewers feel happier and nurture a sense of reward when they watch ads that resonate with them,” adds Harry Harcus, Finecast’s UK managing director. “In an advertising landscape where the battle for consumers’ attention is becoming increasingly fierce, reaching viewers with targeted ads will enable brands to gain a remarkable competitive edge.”

The research involved two experiments to determine how the brain responds to addressable ads.

In the first, conducted in the college’s lab, 24 participants had their brain activity recorded by fMRI while watching TV shows with ads that were either related to their interests (addressable) or not. This study probed what (if any) cognitive and neurological mechanisms were activated by addressable content.