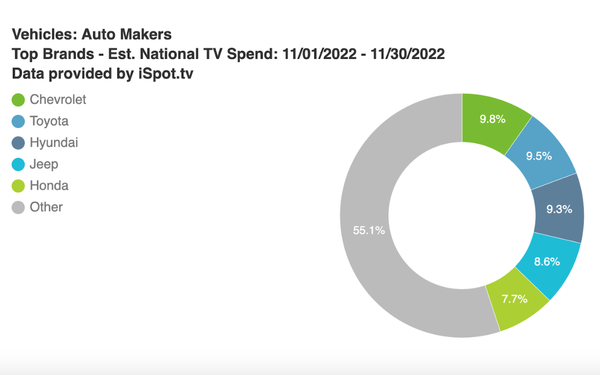 The estimated national TV spending by automakers in November was $304.1 million, down 11.3% year over year compared to $342.7 last November, according to iSpot.tv.

Toyota also increased the frequency of its national TV ad minutes compared to Nov. 2021, with 2.6 times more this year. Hyundai’s spend grew by 27.5% year-over-year, in large part due to increasing its investment in the NFL ($23.1 million this November, versus $15.3 million last year).

With the World Cup in the middle of the holiday season this year, automaker brands are getting a unique opportunity to get in front of massive audiences with holiday messaging outside of NFL and college football games, said Stuart Schwartzapfel, executive vice president, media partnerships at iSpot.tv.

“It also puts a spotlight on the importance of prioritizing the Spanish-speaking market, since Spanish-language automotive ad impressions jumped 44% year-over-year in November on the strength of strong soccer viewership,” Schwartzapfel says.

Jeep’s climb is fueled in large part by a larger year-over-year investment in tentpole programming like the NFL (145% more spent), college football (65% more) and the World Series (nothing last November vs. $599K this year).

On top of the World Cup being new November programming year-over-year,  the World Series featured four games in November this year, versus just one in 2021.