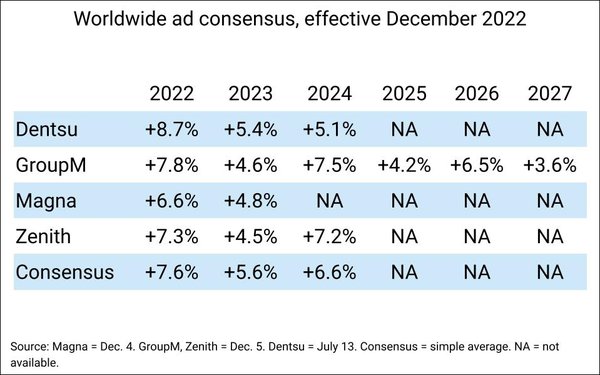 A recession may or may not arrive soon, depending on who you believe, but according to three new agency forecasts the ad economy has remained resilient through this year and will continue to grow significantly in 2023.

GroupM reports that 2023 global ad growth will be 5.9%, a bit lower than the group’s estimate for full-year 2022 of 6.5%. (All figures exclude political advertising).

In both cases the current 2023 forecasts are lower than earlier predictions for ad growth next year and Magna noted the “deteriorating macroeconomic outlook” as the reason for its adjustment. GroupM cited lower expectations for the two biggest ad markets—the U.S. and China.

Zenith issued the most conservative forecast for next year, predicting 4.5% growth, which will follow estimated 7.3% growth for 2022.

All three forecasts cited newer channels like retail media and CTV as factors for continuing resilience in the ad economy.

At deadline Zenith’s full report wasn’t available but a press release noted that U.S. growth between 2022-25 is “expected to provide the biggest contribution” to ad growth--$66 billion, or 44% of global growth during the period.

GroupM’s report, written by Global Director, Business Intelligence Kate Scott-Dawkins, likened current economic turmoil to similar environments that followed WWII and the Korean conflict when economies were hit with supply chain-related shortages and high inflation. But low unemployment levels (then as now) helped to sustain demand and drive growth in the ad economy.

Going forward, the report finds, there are “several drivers pointing to cautious optimism.” In addition to low unemployment levels the report cites the high level of new businesses that are being created—businesses that presumably use advertising to drive awareness and sales.

Also, the biggest declines in advertising so far appear to be limited to “select channels in select markets. For example, Germany, France and the U.K. all downgraded 2022 TV growth from positive in our June forecast to negative in our end-of-year forecast. These markets are expected to face steep energy cost increases and shortages in light of the war in Ukraine.”

And China’s out-of-home (OOH) figure for 2022 is set to decline more than 34% given the COVID-related lockdowns occurring there.

Also, large advertisers are talking about caution and concern but are recording revenue gains because they’re passing costs along to consumers.

And digital channels remain in growth mode, albeit decelerating growth from past years.

By media channel, Magna (whose report was written by Vincent Letang, executive vice president, global market research) reports that cross-platform TV ad revenues will grow by 1.7% in 2022 but decrease by 4% in 2023 as linear declines have yet to be offset by growing audiences on non-traditional platforms.  On the plus side streaming and linear addressable revenues will grow double digits. Aggressive price hikes on the traditional side of the business will also help buoy the medium.

According to GroupM, global pure-play digital advertising is now forecast to grow by 9.3% in 2022. That growth will bring the overall share of digital advertising (not including spending by advertisers on digital extensions of traditional media) to 67% of the industry total. “We expect that share to rise to 73% by 2027.”  GroupM pegs pure-play digital for 2023 at $586.4 billion, up 8.4% over this year.

And retail media—consisting of display and search advertising on ecommerce sites--will continue to grow exponentially over the next few years. Zenith estimates that outside of China, where retail media is already prevalent, the medium will grow 17.8% annually (2021-25) to $64.2 billion.

GroupM says that retail media will reach $110 billion globally in 2022, a figure that includes China. The firm notes that the channel has likely benefited from shifts from offline to online retail advertising, “as well as budget from other media owners to retail media networks.”