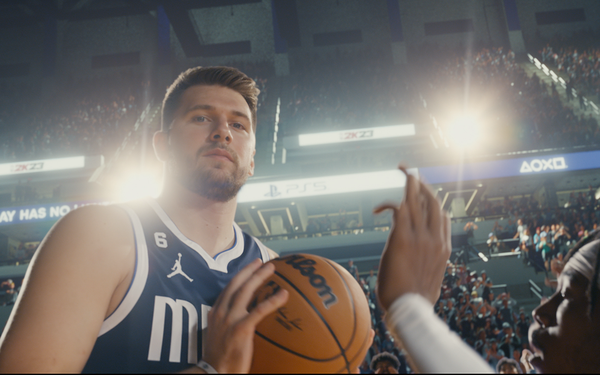 Created by adam&eveNYC, the spot lets viewers feel they are participating in an exciting NBA game, simulating the immersive action on the PS5 console.

The 60-second ad, just out, posits Willie Martinez, a teenage basketball fan who narrates his play, as his words suddenly come to life, transporting him into a real-life game — with help from Dallas Mavericks point guard Luka Doni. Naturally, Martinez scores the game-winning shot.

It's only then viewers realize Martinez has been playing NBA 2K23 on his PlayStation 5 console in his bedroom.

The spot ends with: "Feel the energy on PS5, Feel the contact on PS5, Feel the moment on PS5." The work runs on TV, digital and social channels in the U.S., U.K., Canada, Spain, France, Germany, Australia, New Zealand, China, and South Korea as part of a global campaign.

This is the second incarnation of the NBA 2K23 campaign. The first spot, "Answer the Call," debuted in mid-September and centered around the number 23, Michael Jordan's legendary number. The agency won the account earlier this year.

Media is handled by PHD Media.