Bundling And Discounts Are The New Battlegrounds For U.S. SVODs 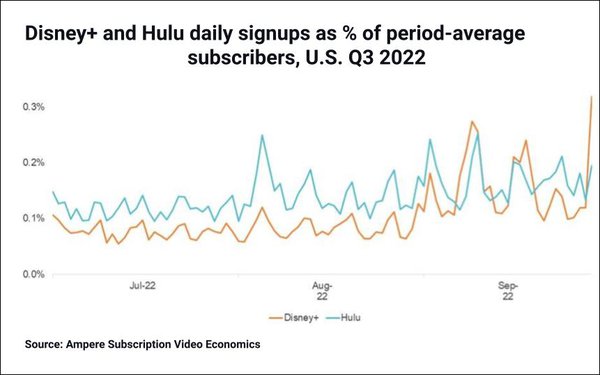 As subscription-based video-on-demand (SVOD) services mature in the U.S., retention is the name of the game — and bundling and pricing are increasingly crucial to maximizing retention, according to a report from Ampere Analysis.

The U.S. SVOD market is increasingly saturated, with households now having access to 4.5 services, on average. As U.S. consumers edge closer to the stacking ceiling, attracting new subscribers and mitigating churn is more important than ever.

Newer platforms, including Disney+, tend to have higher levels of sign-ups and are still seeing strong gross additions to their subscriber bases. But they also have higher churn rates, and tend to rely more heavily on individual title launches for growth and retention.

Disney+, for example, uses franchise title releases and live broadcast debuts to drive sign-ups. In 2022, its first large daily signups peak came on Disney+ Day (Sept. 8), peak in daily sign-ups seen on Sept. 8, 2022 corresponds with Disney+ Day, an annual event that marks the release of exclusive premieres and the announcement of upcoming content. This year’s Disney+ Day saw the release of big franchise titles including “Thor: Love and Thunder,” “Pinocchio” and “Obi-Wan Kenobi: A Jedi’s Return.” 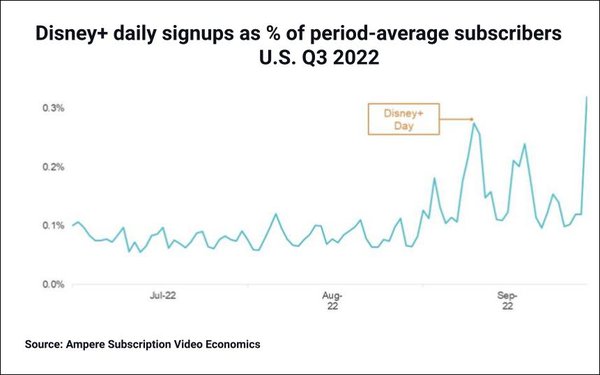 Meanwhile, established services face growing challenges to maintaining and growing their bases, and their sign-up and churn rates are much more affected by pricing changes.

Younger, lower-income consumers who are more sensitive to pricing and content offerings are the primary driver of subscription churn for all SVODs. Discounted ad-supported tiers will help mitigate this churn, says Ampere.

Bundling can also be key in mitigating price sensitivity. That continues to be demonstrated by The Disney Bundle’s strength in driving sign-ups and limiting churn for both Hulu and Disney+. In fact, since nearly a third (32%) of Hulu subscribers come via the bundle, Hulu’s U.S. sign-up and cancellation rates now mimic those of Disney+ (chart at top of page).

Pricing and content offering being the main drivers of sign-up and churn, bundling is a great way to aid customer retention, because it combines both of these by offering larger catalogs and more frequent content additions at cheaper prices,” sums up  Ampere analyst Mayssa Jamil.