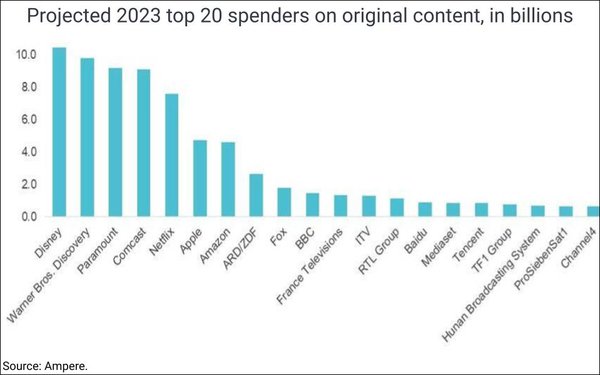 On a global basis, overall investment in original content for streaming and broadcasting will increase by just 2% in 2023, projects media analyst firm Ampere Analysis.

That would be the lowest growth rate in a decade, with the exception of a COVID-driven slump in 2020.

In contrast, original content expenditures are estimated to have grown 6%, to $238 billion, in 2022, driven primarily by subscription video-on-demand (SVOD) platforms.

Despite some degree of increased caution in last year’s second half, SVOD services collectively spent more than $26 billion on original content in 2022, Ampere estimates.

But with economic headwinds expected to put downward pressure on household and advertising spending across the globe in 2023, some leading media companies are indicating their intention to reduce content spend, along with other cost-saving measures.

One major case in point: Following its first global decline in subscribers in early 2022, Netflix announced it would plateau its investment in content during 2023. Even at that, however, Netflix will remain the leader in share of dedicated original content spend, with a 25% global share.

But not all media groups will cut content spend.

In 2023, driven largely by SVOD spend, Disney and newly formed Warner Bros. Discovery are expected to overtake Comcast and its subsidiaries as the largest investors in original content.

Total content investment by SVOD services, specifically, will still grow, but by 8%, compared to 25% in 2022, Ampere projects.

SVODs “will continue to focus on original content to compete in a crowded, cost-sensitive market, but we are already seeing a shift in content commissioning to incorporate a greater volume of cheaper, unscripted formats,” notes the firm’s research manager, Hannah Walsh.

However, commercial and public broadcasters’ content spend is forecast to decline 3% this year, dragging down overall investment growth.

This spending continues to linger below pre-pandemic levels, driven by declines in broadcast TV advertising revenue stemming from wider economic weakness and the ongoing shift of audiences to streaming platforms.