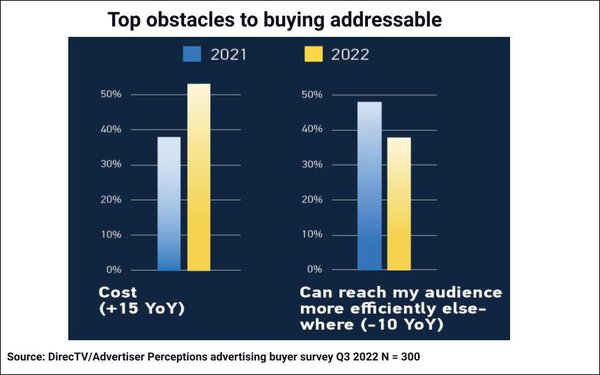 While large majorities of advertising buyers report positive results from addressable advertising, they also confirm that at least three key obstacles still need to be resolved.

That’s according to a survey of 350 agency and brand advertisers at the manager level and above who have purchased addressable TV advertising from a distributor (multichannel video programming distributor/MVPD or virtual MVPD), programmer, or connected TV provider within the past year. The research was conducted in Q3 2022 by Advertiser Perceptions for DirecTV Advertising. Agency and brand advertisers were equally represented.

Importantly, reflecting recent years’ evolution in the targeting method, addressable was defined as spanning linear and connected TV (CTV), streaming and live TV, video-on-demand and playback. The full definition: The ability to serve targeted ads to specific households or users based on deterministic identifiers, allowing brands to define and serve their message to the desired audience wherever and whenever they’re watching content, across screens and devices.

Fully 80% said that they are satisfied with results from their addressable TV initiatives – up five percentage points from a similar survey of 200 ad buyers conducted in last year’s third quarter.

Further, 83% said that buying addressable has increased their ability to meet campaign objectives (up six points from last year), and 86% said that addressable played an important role in 2022 upfront negotiations.

With audience fragmentation a bigger challenge than ever (last year, MRI-Simmons found 51% of consumers saying they consider streaming to be an addition to linear, rather than a replacement), 55% of buyers say that fragmentation will impact their spending allocations over the next two years.

And in good news for addressable, 61% say they’re satisfied with its ability to plan across linear and CTV.

But advertisers say that campaign key performance indicators/KPIs have the greatest impact on media selection, so proving addressable’s effectiveness across the funnel has been key to its increased use.

In fact, whereas advertisers used to use addressable primarily to achieve lower-funnel goals, this survey finds top-of-funnel KPIs (reach, awareness favorability) accounting for  43% of annual campaign KPI composition, on average, among addressable TV advertisers. That compares to 28% on average for both middle-of-funnel (consideration) and lower-funnel (conversion, purchase) goals. 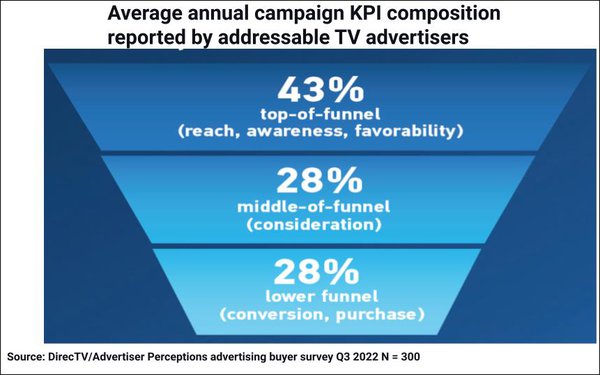 The survey confirms three dominant use cases for addressable, starting with reaching the right audience.

The number of advertisers who say data is having a direct impact on their media decisions has grown, and “some advertisers, largely driven by the brand side, have turned to addressable to validate the investments they have made in first-party data curation and customer segmentation,” notes the survey report. Historically, reaching a specific audience on TV was the chief purpose for including addressable in planning, especially as advertisers tended toward lower-funnel goals. Now, we see advertisers using addressable beyond targeting to drive better ROI through reach and frequency optimization.”

And while 52% report using addressable in their media mix for precision targeting, that is down seven points from last year—while those using it for improved ROI rose seven points, to 47%.

Four in five respondents say they are likely to consider using addressable as a linear reach extension.

Thanks largely to limited CTV inventory — 46% say that this impacts their media strategies — 29% of CTV advertisers report that they achieved fewer than half of their campaign reach goals. But 64% say they’ve been able to use addressable to extend the reach of CTV buys.

In addition, buyers are increasingly turning to addressable partners to secure premium inven­tory in linear, with 40% report buying addressable for access to premium content (up eight percentage points versus last year).

While more advertisers are taking an audience-based approach, the survey confirms that context still matters. Contextual relevance ranks as the top factor in considering in what content to advertise.

Advertisers say they need flexibility to balance audience-driven addressable with a contextually relevant environment, notes the report. “It’s important that advertisers consider their TV advertising holistically — looking across linear, CTV and then how they apply addressable across both.” Seeking only specific viewers in a TV environment limits the potential to scale, and going too granular or too broad may reduce ROI. 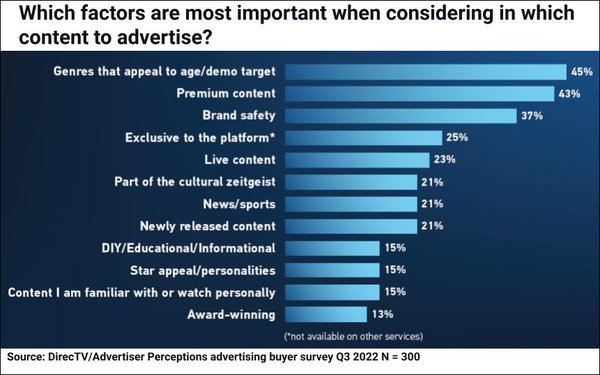 On the downside, cost, measurement and programmatic challenges with addressable continue to frustrate advertisers.

Price routinely ranks as a chief challenge to buying addressable — and this survey finds this truer than ever in the current economic climate.

Nearly two-thirds (64%) said that economic conditions will have the greatest impact on their media spending over the next two years, and more than half cited addressable’s cost as a top obstacle to buying it — up 15 points versus last year.

However, fewer than 40% said they consider other channels to be more efficient, and those that do tend to cite search and social.

Amid economic uncertainty, advertisers should make cuts not on price, but on performance, advises DirecTV. “Consider using addressable to drive efficiency across linear and CTV and reach untapped audiences to increase market share. Smart short-term decisions will have long-term impact.”

On the measurement front, 55% say that inconsistent measurement across platforms and lack of reliable third-party measurement validation will impact their media spend over the next two years.

“As advertisers look to reach audiences across media, they note that the current state of measure­ment is stagnant, siloed, flawed, and fragmented,” sums up the report. “Still, they are not particularly excited by any pro­posed solutions and it is unclear who, if anyone, is taking the initiative to move the needle forward — within their own organizations or within the industry at large. Ultimately, advertisers say they would invest more in addressable if they had a solution for measuring across partners.”

“Nobody’s closed the loop between being able to identify somebody who’s watching a show and then tying that to their online behavior,” observed one agency director. “There’s still a gap, there’s some who claim they can, but it’s just all speculative.”

As a stop-gap solution, DirecTV suggests working with media partners that can provide insight on campaign performance and best practices for meeting KPIs, and with trusted attribution partners to prove out business outcomes, when applicable. Advertisers should align campaign objectives with partners and run attribution for performance insights beyond media metrics. Some addressable partners can also report how addressable reached households underexposed by the client’s national linear campaign, to prove the efficacy of an addressable-plus-linear approach.

A lack of widespread availability of programmatic buying is the third big obstacle for addressable, although providers across linear and CTV are working with ad-tech partners to enable programmatic buys at scale.