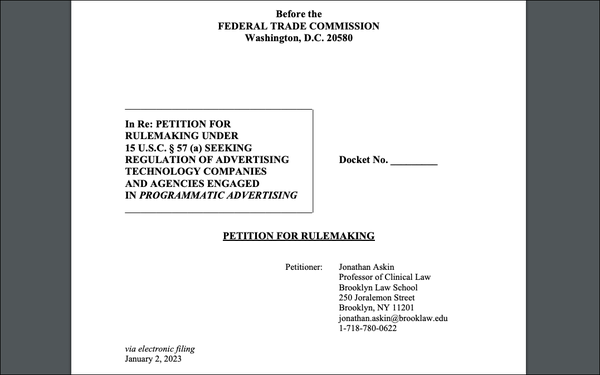 He is urging the FTC to open a proceeding that could result in new regulations for some forms of online advertising -- including some behavioral-targeting techniques that serve ads to people based on information about their online activity across sites.

“At some point over the past few decades, we, as a society, have decided, intentionally or not, to accept the process of viewing ads in exchange for consuming 'free' content on the internet,” Askin writes in his 65-page petition. “Nowadays, this trend goes even further -- instead of seeing ads in exchange for free content, people now unwittingly provide countless unknown advertising technology companies with vast amounts of our personal data in exchange for a few brief moments of attention on a sensationalized article, overwhelmed by ads and slow page loads.”

The FTC recently began the lengthy process of crafting rules that would regulate “commercial surveillance,” which it calls “business of collecting, analyzing, and profiting from information about people.”

Askin's petition has a narrower focus. He is urging the agency to focus on one slice of the online ecosystem -- programmatic ads on publishers' sites. His request excludes search ads and ads on social-media platforms.

The petition urges the FTC to examine how ad companies interact with each other, as well as how they handle consumer data.

Askin says he hopes an FTC rulemaking can shed light on ad-tech practices.

“The ad tech industry has created this opaque black box that no one can understand or audit,” he tells MediaPost.

With regard to privacy, Askin argues to the FTC that the current notice-and-choice system is flawed for several reasons -- including that privacy policies typically allow companies to share data with undisclosed third parties.

“Once your information is shared with a single unnamed 'third party,' it becomes impossible to trace additional exchanges and server-to-server connections to determine who actually uses or has possession of your personal information,” he writes in the petition.

“New regulation is needed that takes the burden off of the individual to read a privacy policy. Instead, the burden to be compliant and respectful of privacy should be placed on those who have the knowledge, expertise, ability, and resources to do so -- the ad tech companies themselves.”

NAI president and CEO Leigh Freund responds that the organization works with members on compliance, and that many of changed their plans or practices in order to comply with the self-regulatory code.

“The goal is to ensure broad compliance, and quickly fixing potential issues, rather than publicizing all missteps or mistakes by its members, as this helps ensure broader adoption and candid responses from members,” Freund states.

“The threat of enforcement and referral to the FTC are generally enough to push companies to fix issues and problems, so the NAI does not ultimately need to make such referrals unless a company refuses to come into compliance.”

The FTC is accepting comments on the petition through February 18.