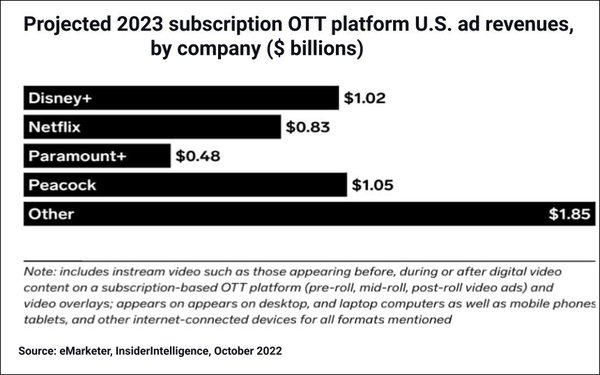 in a major move designed to give it competitive ammunition against Netflix and other ad-supported video-on-demand (AVOD) streamers at this year’s upfronts, Disney is expanding Hulu’s extensive ad-targeting capabilities to buys in the new Disney+ advertising-supported tier, a company executive confirmed yesterday.

Starting in April, Disney+ advertisers will be able to use Hulu’s age, gender and geo-location targeting capabilities. And as of July, Hulu’s full suite of targeting tools and services will be accessible across all of its streaming services, according to Disney Advertising President Rita Ferro.

Ferro discussed the initiative during a LinkedIn interview with Ernst & Young/EY CMO Practice Leader Janet Balis on Monday. Disney is set to offer more specifics during its Tech and Data Showcase on January 25.

The new options, driven by Disney Select, an identity graph with IDs for more than 100 million U.S. households, 160 million TVs and 190 million mobile phones, will include more than 2,000 unique audience targeting segments, including demographics, psychographics and purchasing behavior.

The homegrown, proprietary Disney Ad Server (DAS), which gives the company full control over ad inventory and partnerships, will eventually enable centralized targeting and measurement across all of Disney’s addressable inventory, with all impressions biddable via programmatic.

In 2021, Disney set a goal to automate more than half of its ad sales business within five years.

“Disney+ is part of our full integrated first-party data offering, and so to be able to turn that on and really deliver against it the way we have on Hulu, that’s the plan. All the work has been done,” said Ferro. “That’s the beauty of having everything on the same ad server.”

Disney has been improving match rates with clean room partners to optimize first-party data programmatic availability. Last summer, Disney integrated with The Trade Desk to use UID 2.0 to make its first-party data accessible programmatically, and in December, it announced a measurement integration with VideoAmp.

Disney is also working on developing a scalable solution for measurement across streaming and linear TV. “Making sure we can scale the right currency and framework to measure our inventory portfolio across streaming, linear and mobile is critically important for us to drive opportunities for advertisers in the streaming marketplace,” Ferro said.

Alluding to the upfronts, she said that advertisers want more than just new “currency” options; they want “critical understanding of how data, identity and measurement drive results for businesses.”

Netflix, now going head-to-head with Disney with its own, new Basic with Ads ad-supported streaming offering, currently offers targeting only by content genre and region/country.

eMarketer has projected that Disney+’s new AVOD will draw more than $1 billion in advertising in 2023, to $830 million for Netflix (chart above).

"Disney's move to begin adopting Hulu's full suite of ad products and services is a huge win for the buy side,” comments Jeremy Haft, chief revenue officer at Digital Remedy. “Disney creates and owns some of the best content out there but not every piece of content makes sense for every advertiser. With the [demand for] all digitally delivered ad impressions to have greater accountability, this will allow advertisers to customize their media strategy against premium content and prove campaign effectiveness based on the desired outcome. It will let Disney marry the worlds of art and science to better monetize more of their content in a scalable way, prove that premium content can drive better performance for their advertisers, and provide an even more customizable experience for the consumer."