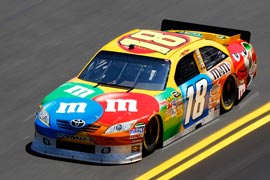 NASCAR's roots (at least “reputationally”) are about as far from the university demographic as professional wrestling is from quoits.

But with the circuit's drivers having for years now been fully mainstream (which is a nice way of saying NASCAR drivers no longer brew beverages in the woods that they could actually use as fuel) and hugely marketable, they should be getting as many collegiates and post-collegiate interested in the track as those stick-and-ball sports. There's only one problem. Unlike football, baseball, basketball, and hockey, racing cars is not a college sport, (unless you're at a very exclusive academy in, say, Monte Carlo).

The program, NASCAR Kinetics: Marketing in Motion, targets university marketing, advertising, business and communications students who might be interested in motorsports, and gives five of the best of them a chance to do case-study based projects on a semester-by-semester basis.

The racing league says the program "teaches case studies and projects based on challenges and opportunities currently facing NASCAR, its official partners, tracks, and other relevant businesses operating in the industry."

The program now involves some 19 schools from six when it launched in 2009. Steve Sweeney, NASCAR's director of consumer marketing explains that by next year the program will have expanded to 30 schools. He tells Marketing Daily  that NASCAR is, meanwhile, adding a second program, which has a lot more to do with getting college kids interested in going to races. As part of the "U. Crew" effort two brand ambassadors at participating universities tout NASCAR at student events, and develop programs with local tracks (Sweeney says NASCAR chooses the universities, to some extent, by their proximity to NASCAR tracks) designed to entice students to come to a race.

"It has been hard to maintain 18 to 34 demographic, so we started to look at ways to engage students," says Sweeney, adding the point of the Kinetics program is to give marketing and communications students a "taste of NASCAR" as a job. "We are getting in front of students and giving them an opportunity to see how they can have a career in NASCAR. Most people just see the driver, but in our sport there are so many roles, especially when you start to look at agencies, marketing, and partners. There's just so much marketing that goes on and lots of opportunities."

Sweeney says the second case study, “M&M’S Makes Race Day More Fun” has a secondary function of building awareness and enthusiasm for NASCAR among the student body at participating schools: the five marketing students per school have to hold NASCAR Viewing Parties around Sprint Cup Series races, and highlight M&M’S brand’s status as the "Official Chocolate of NASCAR" at the events. Sweeney points out that M&M’s and NASCAR provide the students with collateral and a $1,000 budget.

"These are real case studies, with real issues and problems," says Sweeney. "So you end up with 19 perspectives on how these students might attack the problem. The students get to experience real-life stuff, and the brands benefit. And there are benefits for us because when they do viewing parties they are exposing hundreds of students to the sport."

Sweeney says the U. Crew program involves twelve schools, and aim to get students to some of the first ten and last ten races in NASCAR's season. "With NASCAR, every weekend is like the Super Bowl: we get 100,000 per race, and there are days of [events like] tailgating and a level of camaraderie that's hard to fathom. So [we want to] get students out there to experience it."