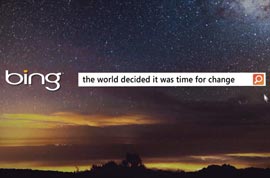 Bing marketers might have finally found a way to use Microsoft's search engine home page to generate advertising revenue. One hot link in Tuesday's home page photo leads to a promo video for the Discovery Networks TV show "Man vs. Wild – Mountain Side Crash."

The strategy, whether intentional or not, highlights a point I've been making since the series of photos surfaced. In today's photo, one hot link reads: "You can hike into this wilderness, canoe, or fly in on a seaplane. But those are all just copouts for this guy."

Microsoft Bing Director of Search Stefan Weitz and other executives for the search engine typically skirt the issue of ads on the home page, but the reality remains that the engine bleeds about $1 billion per quarter -- $5.5 billion since the service launched in June 2009. It's difficult to imagine that ad-free dream a reality long-term.

The Internet would die without the support of paid-search campaigns generating revenue for Google and Bing. Imagine a world where searchers initiate an account linked to a credit card. Each login would cost 5 cents; and each search, 10 cents.

That billion-dollar price tag could continue to rise. Bing launched a new ad campaign the day before Thanksgiving featuring Santa Claus. The search engine will run the spots throughout the holiday season online and in select holiday TV programs. Each stars a cast of characters from Santa Claus to Rudolph the Red Nosed Reindeer to Abominable Snowman Bumble to Yukon Cornelius to Misfit Elf Hermey.

The videos for the holiday campaign -- Decide What Your holidays Will Look Like With Bing -- began rolling out earlier this month. Each highlights desktop and mobile search. 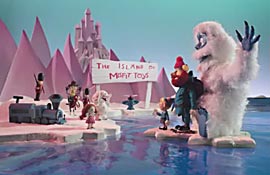 The ads are intended not only to draw attention to the search engine during the holidays, but also for advertisers who might run paid-search ads across Bing and Yahoo, which its technology supports.

The campaign aims to connect with GenYers. They like to embrace broader holiday campaigns, which Microsoft plans to "fully unveil" on Dec. 1, according to a Bing spokesperson.

Bing searches in 2011 identify the year of musical superstars, continued celebrity fascination, saving money, concern for human tragedy, and new royalty. Based on the aggregation of billions of search queries, Justin Bieber became the most-searched person on Bing in 2011 -- up from No. 6 in 2010, knocking Kim Kardashian into the No. 2 spot.

Xbox came in as the most-searched-on for electronics in 2011, followed by Kindle, PlayStation, iPhone 5, iPad, Wii, iPad2, Nook, Windows Phone 7, and MacBook Pro.

The link in the home page to the Discovery Networks promo shows that in-your-face ads are not necessary. One of the best roundups of any year comes to us in this blog post from Microsoft Bing. Find out what changed in 2011.