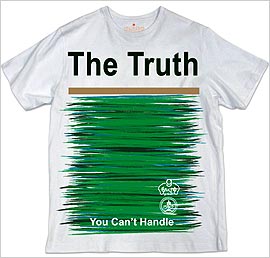 The anti-smoking Legacy Foundation's youth campaign, Truth, aimed at getting kids to avoid trying cigarettes, has a new partnership with designer, artist and entrepreneur Jeff Staple. Through the relationship, Truth is producing a limited-edition line of t-shirts called the “truth1585 Collection.” The program involves online retail, promotional elements, and video.

The group says the shirts will launch in specialty boutiques starting this week and will be available until supplies run out. The effort includes a Web site, truth1585.com, and eight boutiques and street culture stores in New York City, Boston, Detroit, Philadelphia, San Francisco and Washington, D.C. Staple collaborated with each of the stores to produce eight original t-shirts -- one for each boutique’s unique clientele. Individual boutiques will use the gear items as promotional pieces and for giveaways.

The "1585" reference is for the Pantone color for Truth’s signature orange in branding through advertisements, traditional media, on tour, and online. The truth1585.com site will also have behind-the-scenes videos with partner boutiques and designers speaking with Staple about their work and their reasons for committing to the project.

The site also shows the fashions and where to buy them. Also, www.thetruth.com and affiliated home pages on sites like Facebook and YouTube will promote the line and drive followers to the truth1585 site.

Ads will run on a roster of young-skewing sites like Awl; Tauntr (a sports entertainment site); Cool Material (a style site on things like home furnishings, media, and gadgets); Prefix Mag (a music-related content site); and Cracked (comedy destination). There will also be advertising on music-discovery site Grooveshark, Facebook - Advertising will also run on Facebook, which has 800 million active users.