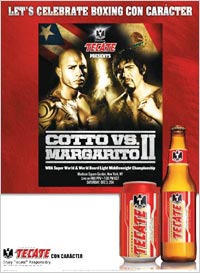 On Saturday night, Madison Square Garden was filled literally to the rafters with fans howling in unison for one man: Miguel Cotto, the great Puerto Rican fighter loved by New York, a city with deep Puerto Rican roots. It might seem ironic, therefore, that a Mexican beer brand, Tecate, was promoting the fight (via its relationship with Top Rank Promotions).

Yes, Cotto's adversary, Antonio Margarito, is Mexican and the fight was televised in Mexico, but in the U.S. -- and particularly in New York -- Margarito is reviled by a lot of boxing fans and, especially, by Cotto fans. And New York isn't a strong Tecate market.

When you look at Tecate's larger purpose, though, it makes sense to be here. Until this year, had the fairly unusual strategy of marketing pretty much only to first-generation Mexican Americans. Now the brand, which also happens to be the rare brand -- beer or otherwise -- whose sports involvement is limited entirely to boxing, is reaching out to all Hispanics in the U.S.

The company's four-year-old boxing activities are via relationships with the top boxing promotional organizations in the U.S.: Golden Boy Promotions and Top Rank. The company activates at retail with limited-edition packaging, pay-per-view rebate deals with purchase, advertising, and a huge brand presence in major fights.

On fight night, Marketing Daily caught up with Felix Palau, VP marketing for the brand, to talk ring strategy, a block away from the renovated Madison Square Garden.

A: I think the most important point is that we really felt that we could be a significant player in this arena. It's about a long-term positioning for the brand. Instead of diluting our resources towards soccer, baseball or any other sport -- we'd love to but don't have those resources -- we align with boxing where we think we can be a significant player. But we need to be consistent and really disciplined in how we integrate here and in Mexico.

Q: How do you track ROI from boxing activities?

A: It's actually hard to track because it varies a lot by state. We look at it from a sales standpoint. There's a lot of money involved in promoting the fights in terms of media, the pay per views and even all of the specific tailored communications around all five big PPV events we sponsored this year. At the end of the day, we want to build positioning for Tecate that is all around character.

Q: So, what KPIs are you seeing from boxing sponsorships?

A: Two things: we have an image tracking system, internally, where we review the different brand attributes we want to build around Tecate. To give you an example, we know from this research that Tecate is associated as one of the most masculine brands among Hispanics, and that drives consideration. We know it is a brand you want to have fun with among your friends. And for the past three or four years, we have found boxing to be really effective in helping us build those attributes.

Q: Have you seen sales spike because of retail activities around PPV?

A: We see from 15% to 17% growth in sales, specifically in markets or outlets in which we activate. That's very hard data, a very clear wave. But it also has a halo effect for us as well in other markets, in on-premises accounts, and grocery stores, even where we don't necessarily promote the fights. We find [even there] that consumers tend to increase consideration.

Q: How has your market strategy changed recently, in terms of broadening brand appeal?

A: This year we began targeting second- and third-generation Hispanics. The population growth in this country is being driven by Hispanics, but when you dive into that, the layers of the population driving that growth are second and third generation, not necessarily the newcomers who were our former target. We have to keep our core Mexican newcomer, but also expand.

So our communications in previous years was built around toasting to the character of the Mexican guys who might have two or three jobs and are working hard. That was until 2010. Then this year we started toasting to the character of the Hispanic man, from a North American point of view. One ad, for example, shows two guys in a bar with their girlfriends and, suddenly, two beautiful girls pass, and they are having a hard time not looking. Finally, one looks and gets a slap. The other guy, who didn't, gets affection. This is, in a fun way, about the character of being a gentleman.

Q: But you are not solely focused on Mexican Americans?

A: When you look at the census, 60% to 70% of the Hispanic U.S. population are Mexican descendants, so we want to keep that going forward. Our learning is that we don't have to scream that we are Mexican, or have lots of Mexican cues in our communications at all, because it's more about Hispanic or Latino values.

And that is the biggest opportunity for Tecate or really any Hispanic brand in this country. We tend to stereotype what a Latino is. You don't need to show guys eating tacos or listening to Mariachi or wearing sombreros. Those are stereotypes. And, frankly, you don't have to have ads only in Spanish. It's finally about the values: family, friends, food and sports.

Q: What programs would you like to add around boxing going forward?

A: We may bring to the U.S. a boxing road show that we have had in Mexico for the past two years. It's a big event in fight markets over two or three days, in a large space, with consumer events, autograph signings, music, three to four months per year.