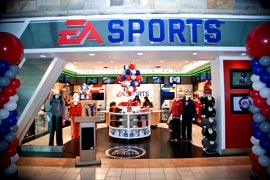 EA Sports is no longer tethered to the virtual world. The brand, known for its celebrity-driven sports games like Madden and the Tiger Woods golf titles, is branching out into airports and cruise ships.

This week, the company is opening its third “EA Experience” airport venue in Salt Lake City (following Charlotte, N.C. and Oklahoma City), and the company recently inked a deal with Carnival Cruise Lines to put EA-branded bars on all of the company’s cruise ships. The goal of the locations is to link the EA brand with real-world sports, Erb says.

The stores, created in partnership with The Paradise Shops, feature amenities such as chairs and recharging stations for digital devices, as well as a place to purchase gear from the local sports teams, and EA games and branded merchandise. Similarly, the bars on the boats provide a way for travelers to keep up with their favorite teams and sports while away.

“Our goal is to create an experience in which we can let you come into our stores and catch you up on the latest sports,” Erb says.  “If we can get good experiences at any time, that’s the upside for us.”

Ultimately, Erb says, the goal is to find ways to deepen engagement with consumers, wherever they may be. “When you’re at our physical location, it’s about getting people to connect with our controllers,” he says. “When you’re on Facebook and Twitter it’s not about saying things. It’s about being engaged through the process.”

Much of that engagement comes through outside partnerships, whether they be airport retail development companies, cruise lines or food brands such as Doritos (through which EA has offered exclusive content of its games through on-package promotions). “I think we do the connectivity through our partners," Erb says. “It’s really about finding partners that want to give consumers value or fund experiences for people.”

Of course, it’s also about making those experiences meaningful and relevant, with partners that make sense. First and foremost, the partners EA chooses have some sort of sports connection (like a Nike, Gillette or even Lowe’s, which is an NCAA sponsor). “Sports consumers are bombarded with sports advertising and marketing,” Erb says. “To reach those people we need to partner with brands that are relevant in those spaces.”

Moving forward, Erb says, the company will continue to evaluate its current initiatives (including the stores and bars) and create experiences that build positive associations with the brand, which, hopefully, will translate into sales.

“[Next year] and beyond is about understanding what consumers think about what we’re bringing them and tweaking and expanding that,” Erb says. “It’s not about driving to the specific end goal of the sale. It’s about building the experience that will translate to the sales at some point.”