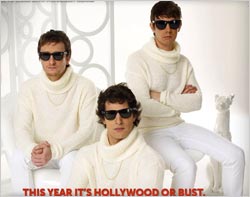 Doritos is on the home stretch of its yearly "Crash the Super Bowl" campaign, which it introduced for Super Bowl XLI in 2007. The pre-game campaign involves consumer-created Doritos ads and consumer voting on which gets to run on air during the game.

The company has lined up five finalists for the program, which this year has a Hollywood theme, and some interesting online distribution elements that go beyond Doritos' Web site: the PepsiCo unit is running its first ever digital partnership with New York-based digital buzz marketing network BuzzFeed for the annual campaign.

Last year Doritos used standard banner ads to drive online buzz and the consequent consumer votes that determined which consumer-generated video ad would run on the company's "Crash the Super Bowl" media buy. This year for "Crash the Super Bowl Hollywood Edition," BuzzFeed is tasked with driving consumer voting and buzz-building leading up to the Feb. 5 game.

BuzzFeed is wrapping voting functionality around editorial posts with headlines like "7 People Who Would Do anything for Super Bowl Tickets" and "Awesome Amateur Commercials That We Wished Aired in the Super Bowl." The firm started running the campaign this week with voting at the official contest Web site, www.crashthesuperbowl.com, and m.crashthesuperbowl.com and via Xbox Live.

Also new this year, Doritos is offering a cash carrot for voters, including a grand prize of $100,000, and $10,000 to a voter each time 100,000 votes are added. The company also reached out this year to filmmaking online communities like IndieTalk.com with an "IndieTalk Giveaway" dangling a $200 Amazon gift card to buy filmmaking-related equipment by leaving a comment with a favorite "Crash the Super Bowl" ad.

The company says there were some 6,100 entries in this year's contest. Each of the five finalists win $25,000 and a trip to Indianapolis to attend the game. Also, Doritos is dangling a cash prize of up to $1 million to the maker of an ad that manages to score in the top three spots on either the traditional USA Today Ad Meter or the USA Today Facebook Super Bowl Ad Meter, per the company.

Another change this year: the winners get to work on a future Doritos brand project with the SNL comedy trio of Andy Samberg, Akiva Schaffer and Jorma Taccone, collectively "The Lonely Island." While one of the winning Doritos ads will be chosen by consumer voting, the second will be selected by the comic trio and the Doritos brand team.