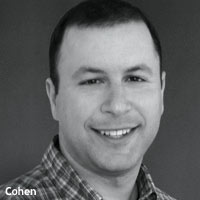 As much as people embrace all things digital, they’re much fussier when they turn into actual shoppers. In fact, QR codes and social media have very little impact, according to new research from Catapult Action-Biased Marketing, a Westport, Conn.-based researcher. Brian Cohen, director of digital shopper marketing, fills Marketing Daily in on what seems to work now, and why.

Q: So what was the big surprise in your study?

A: We looked at 1,200 consumers, and the role that social media is playing is not as large as we thought it would be. It’s a good consumer and advocacy tool, and it builds brand awareness. But once the mindset shifts to shopping, she is not going to Facebook, or to blogs. We keep saying to clients, “Don’t forget the boring,” because she is going to traditional sites, such as the brand’s site or Google. On larger-ticket purchases, she is increasingly going to ratings and reviews.

A: It’s a prime example of a technology developed by marketers first, and not with shoppers in mind. In the first place, there are still many people without smartphones, so you’re already saying, “You can’t play” to a big chunk of the population. And then among smartphone owners, there’s already a tremendous amount of fatigue, and usage of the codes is down 20% since we did the last study. We are always recommending an alternate entry whenever they are used, such as a Web site. And so often, what they are delivering isn’t really interesting or useful.

Q: So what are some effective uses of QR codes?

A: Marketers just need to think more about mind states. For example, a subway ad with a code that leads to a photo of model Brooklyn Decker -- that means something to users. In the ketchup it sells to restaurants, Heinz has a QR code on the bottle. So people are sitting around eating and have time to pursue it. Basically, shoppers are usually in two mindsets: Will it save me time? Will it save me money? QR codes may save people money, but they don’t save time.

Q: So what do shoppers really want?

A: The piece of data that excites me the most in this study is the understanding that digital tools in general are delivering against more need states than just “save time” or “save money,” even if marketers don’t realize it. For example, traditional store circulars rank higher for “gives me new ideas” than “saves me money.” So we are wrong about how we are using this tool. It shouldn’t just be coupons -- it should have a video or a recipe or something engaging. Paperless coupons deliver 17% higher on “rewards me” than “saves me money.”

Q: You found people still have major privacy concerns. Can you explain?

A: Yes, privacy is a tremendous concern, with 74% of the shoppers we surveyed expressing some level of concerns, and 23% saying they are extremely concerned. But what they claim to be worried about and how they act aren’t the same. It doesn’t seem to be slowing anybody down using digital tools.