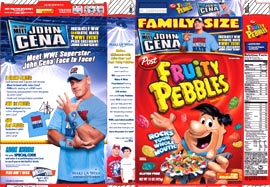 Cena -- and an instant-win promotion offering grand prizes that include a “meet-and-greet” with Cena -- are being featured on the front and back panels of three million of the kids’ cereal’s boxes from January through March.

In addition, the boxes’ side panel is being used to build awareness of the Make-A-Wish Foundation and the ‘be a STAR’ anti-bullying alliance founded by WWE and The Creative Coalition. Panel messaging encourages kids/families to learn more about Make-A-Wish by visiting WWE.com/JohnCenaWish.  Cena’s ongoing support of Make-A-Wish has included granting more than 250 wishes to children with life-threatening medical conditions.

According to Post, the endorsement gig came about after Cena’s WrestleMania XXVIII opponent Dwayne “The Rock” Johnson, alluding to Cena’s brightly colored wardrobe, likened Cena and his fans to a bowl of Fruity Pebbles as part of the onscreen/social media taunting activities familiar to WWE fans. The “insult” became an ongoing joke between the two, spurring a Twitter topic trend and substantial free publicity for WWE. Cena ultimately embraced the nickname, eating the cereal on camera backstage prior to making his entrance in the ring and declaring himself “Yabba, dabba delicious.”

Cena, who joined WWE in 2002, previously has endorsed/appeared in campaigns for brands including Subway (ads with spokesperson Jared Fogle), Gillette (“Young Guns” NASCAR TV ad and online “Be A Superstar” campaigns), YJ Stinger energy drinks, and “signature collections” of energy drinks and bars marketed by American Body Builders.  In all, Cena represented a $106-million “brand” at retail in 2010, reports a WWE spokesperson.

Cena has also appeared in numerous television shows and in movies produced by WWE Studios, as well as a Nickelodeon-aired kids’ flick, “Fred: The Movie.” His rapper/hip-hop recordings have included an album, “You Can’t See Me,” that made the Billboard and other music charts, and singles such as “Basic Thugonomics” (used as one of his WWE theme songs).