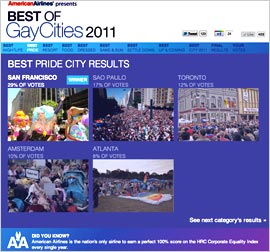 American Airlines is the exclusive sponsor of the “Best of GayCities” -- a promotion where GayCities members voted on the best cities in a number of categories. GayCities is an LGBT community-driven city guide.

The Fort Worth, Texas-based airline has long reached out to the gay market with initiatives including a dedicated web page, a dedicated Facebook fan page and by inviting LGBT consumers to register their interest in LGBT information in their AAdvantage account. With the GayCities promotion, in addition to the sponsorship elements, each voting page provided additional info about American Airlines' diversity efforts with calls to action for the user to “like” American Airlines or update their AAdvantage profile.

“Our investment and commitment in the LGBT community has created loyalty to American Airlines for over the past 20 years,” Abrahim tells Marketing Daily. “We demonstrate this commitment by being a corporate leader in making sure our policies and practices assure equal treatment and respect for all.”

For example, American Airlines is the only airline to have earned a perfect 100% score from the Human Rights Campaign's Corporate Equality Index from its start 10 years ago, he says.

While LGBT customers are not necessarily more affluent than others, they tend to be raising fewer children and also choose to spend more discretionary funds on travel of all kinds, Abrahim says. “They are eager to connect and reconnect through travel, and also enjoy many community events that include pride and film festivals, choral performances, and sporting competitions, as well as professional conferences,” he says.

Tens of thousands of people cast votes for great destinations in nine categories. Other winners included Provincetown for “Best Resort Town,” Paris for “Best Food City” and Buffalo for “Best Up & Coming.”

Fifty cities, from Toronto to Santiago, received nominations based on thousands of reviews, fans and check-ins this year by GayCities members across the globe. Each winning city will receive a special virtual badge on the home page of its GayCities guide.