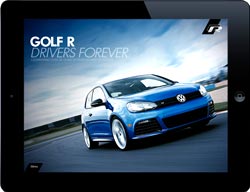 Volkswagen is launching an iPad app called “Golf R Drivers Forever,” touting the most powerful out-of-the-box car it makes. The app's launch is timed with the arrival this month of the sixth-generation Golf R factory-revved performance car.

The Herndon, Va.-based VW of America says the app (free at iTunes App Store), aimed at enthusiasts, serves up an interactive narrative on the nameplate's evolution starting from the Rabbit in the 1970s. It also ties into the Golf R virtual community and has video of engineers of Volkswagen R GmbH, delving into what makes an R an R.

The company says the app has videos, photos, interviews and Golf footage, as well as a mini-documentary about the Wolfsburg, Germany world of Volkswagen, including the Autostadt industrial park, visitor center and recreational area.

The content, via AWOL Films, also has an interview with designer Chip Foose discussing the VW brand and the Golf; testimonials and enthusiast stories; an interactive timeline; and a Golf R brochure with tech specs, photo gallery and 360-degree view of the car.

Charlie Taylor, VW general manager for digital marketing, tells Marketing Daily that the app's initial target is enthusiasts, those who will devour any VW-centric information they can get their digital hands on and then share it. He says that although it has been about five years since the automaker rolled out its last spaetzle rocket, the R 32, the new app has a more recent antecedent in VW's 2009's campaign for the GTI car centered on a mobile game app called "Real Racing GTI."

"We learned a lot from that, and were pretty inspired by what we found," says Taylor, who explains that tens of millions of people downloaded that game. But while the target download numbers for the new Golf R app are smaller, they are potentially huge because of the target: hardcore VW performance-car fans who like to talk up the brand via social media.  "We took this approach because those 1.6 million enthusiasts could then use social to reach an estimated 6.4 million, first to fans of VW in general, then that same conversation could allow us to possibly conquest people who might not even be considering the Golf R, but maybe [Mitsubishi's] Evo or the Subaru WRX."

Taylor says the Golf R Drivers Forever app, chock-a-block as it is with one-click buttons that allow users to "like" or "Tweet" or generally share content, makes sense as a platform touting VW's R cars because the buyer segment over-indexes for digital media habits. "What we found was a high propensity to use the mobile Web, and that the core buyer for Golf R indexed especially heavily for tablet use."

The campaign has two phases, per Taylor, starting with the launch of the app itself, a presence for "R" on VW.com, and a partnership with the largest enthusiast blog in the U.S., VW Vortex, as well as on mobile WAP, Facebook and YouTube.

Phase two starts in May with digital advertising and some print focused on telling Volkswagen's performance story. "Phase two will include the GTI and Jetta GLI cars, so brand, strategy, style, performance and fun-to-drive are how we are defined for a big part of the year," says Taylor, adding that the major objectives -- in addition to the obvious one of driving Golf R sales -- including boosting the prestige of the VW brand and reinforcing the affinity of the brand's fan base.

This year the company will be using digital programs to support a range of vehicles, per Taylor, who says there are four specific models in the VW portfolio that are both the volume players and owners of the lions' share of offline media.

VW has something like 11 models in the family that will not benefit offline media support, "So they will need lots of digital support -- and digital now has reach, and our ability to target is amazing, so we will use digital and mobile for all products and specifically heavy lifting for those not getting offline media," he says.

And that works especially well for younger audiences, who skew toward mobile programs such as VW's flash sale of three Jettas for $5,995 in December on gilt.com. "We wouldn't do that for Passat; so it boils down to specific products and who the consumers are who index for them."

AKQA, the agency behind the Real Racing GTI game and Jetta program on Gilt, handled the designed and created the app.