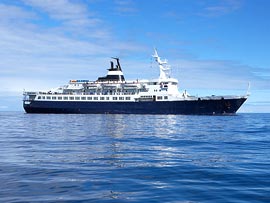 In the aftermath of the Costa Concordia cruise ship tragedy, 37% of travel agents report being contacted by clients booked on 2012 cruises, according to Travalliance.

Travel agents with clients booked on 2012 sailings estimate that close to 10% of these travelers have expressed an interest in canceling their voyage.

January is known as Cruise Wave Month, the biggest booking month of the year for cruises, however 20% of travel agents indicate that the incident has negatively impacted their bookings while 68% say it has had no noticeable impact and 11% had no response.

Thirty-four percent of those booked on a cruise are concerned about the safety of cruising. This is an industry-wide problem, and the crisis is not really being managed, says Mark Murphy, publisher of Vacation Agent magazine and CEO of Travalliance. Cruisers are relying on travel agents -- who are responsible for booking 70% of cruises -- to be their crisis manager.

Many of the agents' comments indicated they thought the industry needs to do a better job of communicating to them, something that has been evident for years, Murphy tells Marketing Daily.

"Before this event ever happened, Carnival Corp and many of their brands, including Costa, have been missing in the trade media that travel agents utilize for their information," Murphy says.

This incident thrust the U.S. Travel Agent, the group responsible for 70% of cruise industry bookings (from U.S. Travelers), into crisis managers. Travelers who had booked cruises with these agents were calling them with questions and concerns.  "These agents should have been better prepared for their day-to-day client servicing as well as an extreme incident like this," Murphy says. "In addition, all cruise lines should have been out touting the actual safety record of this industry, but most have chosen to remain silent in the days following the incident.  This was a big mistake and will hamper their ability to drive first-time cruisers to cruise."

The No. 1 concern, expressed by 34% of all travelers who contacted their agent, is the safety of cruising in general, and 15% wanted to know how they would be protected if something similar happened to them in the future.

The survey indicates that the consumer is focused on the entire cruise industry and not simply Costa Cruises, Murphy says. Travel agents responsible for selling the vast majority of the cruises have been turned into crisis managers on behalf of the cruise industry, placating concerned clients who are looking for answers.

Forty-two percent of travel agents rate the cruise industry’s response to the Costa Concordia incident as fair to poor and 30% rate is as excellent.