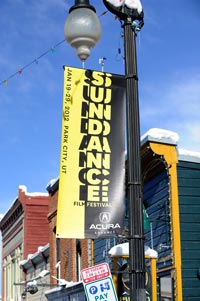 Acura is taking the stage at the Sundance Film Festival this year. Last year was the first time the Honda luxury division stepped out of the Honda corporate shadow into the mile-and-a-half-high sunlight in Park City, Utah to tout its products. But Honda Motor Corp., which had been the automotive sponsor of the Festival from 2008 through 2010, still had a presence. Honda used the celebrity-rich event to influence the influencers with displays of high- technology machines like the Asimo robot and Honda Jet, as well as films like "Undying Dream."

But the auto action at this year's festival, which wraps on Saturday, is solely about Acura and its vehicles. That makes sense, as the luxury division of the Japanese automaker (whose U.S. offices are in Torrance, Calif.) is executing big vehicle-design changes, and it’s bringing back its halo car, the NSX, a Lamborghini- fighter for the rest of us. Or for some of us, anyway. The Sundance placement also makes sense, since a stylized version of the NSX will be superhero character Tony Stark's car du jour in the forthcoming "The Avengers" movie from Marvel.

Home base for Acura in Park City is "Acura Studio," a storefront venue on the town's Main Street. The studio comprises a lounge and barista bar where the NSX and a Paul McCartney- designed Acura TL for the non-profit MusiCares, a support program for struggling musicians, are on display.

The studio will also be the venue for cast parties and press events for featured movies.

The automaker is also using 45 of its MDX SUVs as official shuttle vehicles -- one of the perks of having "official vehicle" status. That vehicle and the ZDX will also be on display around Main Street and at the festival headquarters.

Susie Rossick, brand manager of Acura National Advertising, tells Marketing Daily that the event is also a good sponsorship opportunity because it isn't overrun by brands, and the festival favors category exclusivity. "There are brands up there, but Sundance does a good job of limiting sponsors and they are very good about being territorial with partners," she says. "You won't see another competitive brand up there."

Acura's street-team tactics play on the orphan-glove syndrome prevalent at ski resorts and wherever gloves are worn. Rossick says street teams are strolling on Main Street, giving away a single glove to passersby. To the glove is attached a tag that reads, "Missing something? Come to the Acura Studio to reclaim the other glove." When they come into the studio, they get the other one, plus amenities and, of course a look-see at Acura vehicles and technology. "There is a lot of foot traffic on Main Street during the festival," she says, adding that the attendee psychographic hits Acura's sweet spot. "Typically, the target with independent film is aligned directly with who we are."

The Acura Studio is also hosting cast dinners for "Celeste & Jesse Forever," which stars Rashida Jones and Andy Samberg and "The End of Love" a film starring Michael Cera and Shannyn Sossamon and "The Words," which stars Zoe Saldana. It is also doing a cast party for "Your Sister's Sister," which features Emily Blunt and Rosemarie DeWitt.

Rossick says the cast parties garner Acura earned media as the Acura logo festoons the press photo-op backdrop. "We have been on USAToday.com, various Web sites and blogs, so we have gotten really good coverage from this," she says. "It also gives us a chance to introduce [the entertainment biz] to Acura."