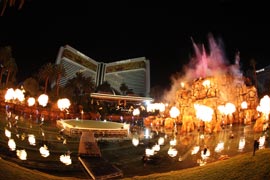 Callaway Golf is touting its 2012 product line with a new campaign that might be thought of as "extreme golf." Ads to air during CBS’ coverage of the Farmer’s Insurance Open promote the company’s line with stunts in Las Vegas meant to spotlight the power, accuracy and innovation of the new product line. The campaign, called "Epic Demo," is by Denver-based Factory Design Labs.

One spot has PGA Tour pro Alvaro Quiros using Callaway's RAZR Fit Driver to fire a round 310 yards over the Bellagio fountain, complete with crowds along the Las Vegas strip.

The company says forthcoming spots will feature Callaway golf-pro spokespeople like Phil Mickelson and Annika Sorenstam doing other similar shots from places like the rooftops of the Luxor and Excalibur, and the flames of the Mirage Volcano. The ad theme line is “Serious fun, serious performance.”

The RAZR Fit ad will air Jan. 28 during the Famers Insurance Open telecast on CBS. A 60-second ad touts the Mirage HEX features Mickelson shooting from an elevated tee box at the edge of the Mirage Hotel’s pool. He sinks shots on two raised greens: one placed approximately 95 yards away, and another placed at 250 yards to showcase distance off the tee. The pool of the Mirage has a faux volcano that shoots fire. That provides another barrier as Michelson shoots for a floating green.

Another minute-long ad, “Rooftop RAZR X,” which starts in February, touts Callaway's line of irons. Golf greens adorn the tops of the Luxor and Excalibur hotels, and helicopters are golf carts shuttling pros from one tee to the next.

The campaign comprises national television, print and digital advertising, which will run from through March. The company says TV will run on networks like CBS, NBC, ESPN and the MLB Network. Print will run in the golf vertical, in books like Golf Digest, Golf Magazine, and SI Golf Plus. The company says online ads will adorn sites like PGA.com, GOLF.com, Yahoo! Golf, GolfChannel.com, GolfWRX.com, and danPatrick.com.

A spokesperson for the brand says the campaign is larger than previous efforts by Callaway. "They have realigned and put more investment into the ads and marketing this year," he says. The campaign also involves "Callaway Creative Director" Justin Timberlake, who helped in pre- and post- production.