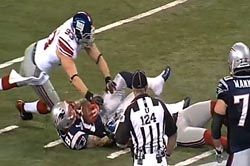 For the third year in a row, the Super Bowl set a record for the most-watched program in TV history -- hitting 111.3 million total viewers, per Nielsen. But it reached the mark by the slimmest of margins -- 0.3% or 300,000 -- over Fox's Super Bowl a year ago. In this year's Super Bowl XLVI, the New York Giants beat the New England Patriots in a close game, 21-17.

On a household basis, the game earned a 47 rating/71 share, up 2% from a year ago. Almost three of every four U.S. TV sets that were turned on were tuned in to the Super Bowl. While it was the most-watched TV program ever, the game averaged a 40.5 rating among 18-49 viewers -- the highest Super Bowl 18-49 rating in 16 years.

NBC also got major good news for the season premiere of "The Voice" -- grabbing a 16.3 rating among 18-49 viewers and 37.6 million viewers. It was the highest-rated non-sports TV show in six years, since ABC's post-Super Bowl telecast of "Grey’s Anatomy" on February 5, 2006, which earned a 16.5 rating.

In terms of overall total viewers, "The Voice" grabbed NBC’s best post-Super Bowl program results since "Friends" on January 28, 1996, which had 52.9 million.