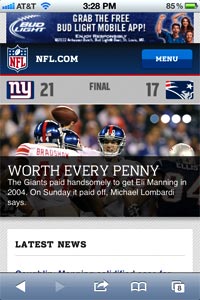 Despite all the hoopla around two-screen viewing, findings from market research firm NPD Group indicate that interaction with smartphone apps during the Super Bowl did not live up to expectations. Engagement with football-focused apps from ESPN and the NFL were actually down compared to the playoffs two weeks ago, and neither the Giants or the Patriots apps showed meaningful usage during the game.

At the same time, NFL.com showed a significant spike in traffic, undercutting the claim that apps are dominating the market at the expense of the Web, according to NPD Group’s Connected Intelligence SmartMeter, which tracks consumer use of smartphone applications, Web sites, communications, and content services.

“While the overall smartphone apps market did not match the overly ambitious hopes of many, the use of both apps and Web sites still show a significant reliance on the smartphone as a second screen,” said Linda Barrabee, research director, NPD Connected Intelligence, in a statement. She added that apps still have a long way to go before becoming an “invaluable” part of the Super Bowl experience.

While the football apps were a mixed bag, the NPD research suggests that marketers had better results with their Super Bowl-related apps. The firm pointed in particular to Chevy’s Game Time offering and Shazam, whose app allowed users to tag special content and offers in a few dozen of the TV commercials airing during the game.

“Both had strong ad placements relatively early in the game, and –- even more importantly -- both had strong tie-ins to the ongoing entertainment that helps to drive their use. Shazam’s use by smartphone users on Super Bowl Sunday, for example, was more than the combined use of the app for the previous two Sundays,” said Barrabee.

Shazam said this year’s effort drove record engagement in all aspects of the game, from the ads to the halftime show to the game itself. Its ad partners included Best Buy -- whose ad drove the most interaction --Fed Ex, Toyota and Pepsi.

Marketers’ mobile sites also saw a spike in smartphone traffic, with those of Samsung, Cars.com, GoDaddy and Volkswagen among the top gainers. NPD pointed out that the GoDaddy site outdrew the company’s promoted application, although the gap between the two was relatively small. GoDaddy claims its SuperBowl ad for cloud services that featured an on-air QR code drove its highest traffic ever to GoDaddyMobile.com.

Unlike the marketer apps, the football apps did not benefit from repeated calls to action in TV ads and offers of access to special content, as with Shazam. “In the case of sports apps, consumers were already watching the game, so consumer engagement may have been limited to a smaller audience looking to their smartphones for companion information,” said Barrabee.

She said content providers need to work harder to build compelling solutions that truly target the needs of consumers in a multi-screen setting. The most compelling use smartphones came not from applications or mobile sites, “but from the thousands of smartphones that provided a backdrop to the halftime show by Madonna,” noted Barrabee.