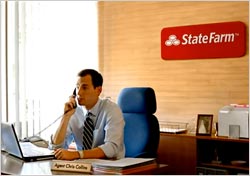 It might be time for Geico to retire the gecko and the caveman. And Progressive may want to put the perky Flo out to pasture as well.

Both brands have been on a long-term downtrend in consumer perception since fall 2010 in the U.S., while State Farm and Allstate have eclipsed those brands riding on their own quirky campaigns, according to YouGov BrandIndex, the daily consumer perception research service of brands.

Insurance companies have put old-school ads with men in suits and a deadly serious tone in their collective rearview mirrors. As a result, the category appears to be getting tighter with the possibility of a changing of the guard, said Ted Marzilli, senior vice present and managing director at BrandIndex.

State Farm, Allstate and Farmers Insurance have used their own edgy marketing to outdo Geico and Progressive. Taking a page from the Geico playbook, Allstate introduced its offbeat “Mayhem” character, which appears to have helped propel the brand to its highest perception point with consumers in more than four years.

State Farm got hipper by putting Green Bay Packers quarterback Aaron Rodgers in weird situations with his teammates and portraying him as being stalked by “cheeseheads.” Its latest “State of Disconnect” ad featured two guys quoting Journey lyrics to each other.

Farmers Insurance saw its consumer perception rise when it debuted its “University of Farmers” campaign in the fall of 2010. Its perception levels are now on par with the much-bigger Progressive.

Geico, Progressive, Allstate, State Farm and Farmers Insurance were measured with YouGov BrandIndex’s Buzz score, which asks respondents: “If you've heard anything about the brand in the last two weeks, through advertising, news or word of mouth, was it positive or negative?”

Geico led the insurance category in consumer perception for 2008 and most of 2009 with buzz scores hovering around 25. By October 2010, the company began gradually losing steam and its current score is at 21.

Progressive has seen its own fortunes rise based its long-running Flo character, rising from a 12 score on January 1, 2008 to averaging around 17 until -- like Geico -- fall 2010. At that point, Progressive began slowly drifting down to its present 13 score.

State Farm was at 19 from 2008 until April 2009, when it began its present long-term perception ascent, leading to its current score of 26. State Farm passed Geico’s score at the end of January 2011 and it has been the category perception leader since then.

Allstate was in a regular cycle of peaks and valleys from 2008 through the end of September 2011, depending on its spending activity, going as high as 19 and as low as 15. Since October 2011, Allstate has risen to its current 21 -- the highest it has been since the beginning of 2008 -- placing it at a virtual tie with Geico.

Farmers Insurance was averaging around 6 from 2008 to mid-2009. It began its impressive ascent in late January 2010, when it started at a 5 score and moved up to its present 13 score, right where Progressive currently stands.

YouGov BrandIndex (www.brandindex.com) interviews 5,000 people each weekday from a representative U.S. population sample -- more than 1.2 million interviews per year. Respondents are drawn from an online panel of more than 1.5MM individuals. None of the insurance companies cited in the research are clients of YouGov BrandIndex.