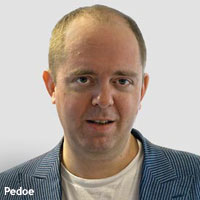 True Knowledge, the father of personal search assistant Evi, which performs many of the same functions as Apple's Siri, plans to release a series of application programming interfaces (APIs) that allow product developers to build in voice-activated features in television products, cars and more.

William Tunstall-Pedoe, the company's founder, believes Evi and products like this, such as Apple's Siri, will replace manual tasks people typically do now with apps. Through APIs, the technology will potentially become a channel for voice-activated systems in cars or homes.

"She's out there in the cloud," he said. "The Android and Apple apps are two channels to talk with her, but we expect there will be other channels like a TV in the house and car. Evi becomes a computer system, and the apps are ways to talk with her."

Ask Evi her age, and she'll tell you she's one month and 25 days old. The data changes daily. While some of the content comes from crawling the Web, more gets stored in a database that Tunstall-Pedoe refers to as her "head." Sometimes she consults the knowledge in her "brain" and combines it with information across the Web to give users more options, he said.

Unlike Siri, the first version of Evi cannot send a text message, but the company says it does a better job of handling  dialects and looking up British businesses and maps. Tunstall-Pedoe said the Cambridge, U.K. company plans to release the feature soon in the next version. An Android update will likely come first, he said, hedging a bit when asked whether the recent "situation" with Apple contributed to the decision.

Tunstall-Pedoe said reports that Apple had threatened to remove the app from the store were accurate, but the two companies are working through their differences. "We're in the process of getting an update out," he said.

Personal assistants like Evi and Siri are expected to alter retail behavior. Catapult Marketing conducted a study that eMarketer suggests will change the way consumers shop -- with 39% looking for coupons or deals, and 35% comparing prices on the shelf.

Evi uses the same speech recognition system as Siri, but True Knowledge's core semantic technology begins where speech recognition leaves off. The company licenses technology that turns speech into text, which recognizes content across the Web. Tech hurdles included understanding natural language and inferences, and calculating the knowledge and words in such a way that computers can understand meaning.

Tunstall-Pedoe said the product road map includes advertising and the ability to serve content based on location. A voice search on a specific subject, location or preference enables the opportunity to insert information into the conversation, such as, you're hungry and standing next to a restaurant offering a 30% off deal.

The technology opens the potential for more sophisticated matching services that marketers require. Evi knows a lot about the user and location, so the app could potentially link questions and users with marketing content. For local searches, such as find cafes near me, the technology can rely on a call to an API or other services like Yelp.

Aside from Siri in the past year, voice-activated apps have begun to emerge on the market. Take Dragon Go for the iPhone, iPod Touch and Android, for example. The app eliminates a sea of blue links common in traditional search apps. The search pulls in content from Ask.com, Dictionary.com, ESPN, Fandango, Google+, iTunes, LiveNation, OpenTable, Pandora, Spotify, Twitter, Wolfram Alpha, Yelp, YouTube, and others.

Asking a mobile phone for information through a voice command, similar to the way one person asks another a question, creates a personal connection between human and machine; it could also transform mobile search.