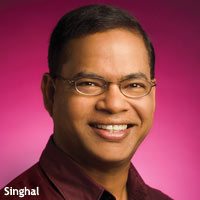 Google plans to give its search engine a makeover by integrating semantic technology that will return results more similar to how humans view the world. Google Fellow Amit Singhal in Thursday's Google+ post explains how the company's ability to turn raw data into knowledge and deliver the most relevant information relies on its understanding of the questions.

"And right now, our understanding is pretty darn limited," he wrote.

Singhal admits queries typically return "decent results" based on keywords, but not necessarily because the engine understands the depth of the question. Rather than returning a list of links to Web sites, the changes will allow someone searching on Huntington Beach to also see average temperature, current wind and humidity readings or surf conditions. More complex questions, such as "What beach has the longest shoreline in California," might provide the answer.

Google acquired Freebase in 2010, and since then grew its 12 million interconnected entities and attributes to more than 200 million. I's not clear how the changes will affect paid-search marketing and search engine optimization.

Will integrating semantic technology into a search engine change the way that marketers optimize Web site content and pages? aimClear Founder Marty Weintraub said "the fundamentals of providing content to serve users' needs will never change. The meaning of great site structure may evolve a bit. Semantic stemming research tools, both predictive and at the live URL/site and competitive level, will evolve in exciting ways."

The semantic technology is expected to give Google a better tool to retain or grow market share and expand on its voice search technology to compete with Apple's Siri.

Despite an explanation of changes in The Wall Street Journal, Google did not describe the next logical step that will take the engine deeper into voice features. It did touch on ways it hopes to keep a lead in search engine market share.

Google Sites led the U.S. explicit core search market in February with 66.4% market share, followed by Microsoft Sites with 15.3%, Yahoo with 13.8%, Ask Network with 3%, and AOL with 1.5%, according to comScore.

Yahoo told MediaPost last month it continues to move toward building a "content index, rather than Web index," to gather information from every HTML page that exists. In a February interview, Yahoo SVP of products Shashi Seth described semantic technology and said Yahoo continues to build in new search features and tools that provide answers rather than links. Yahoo has begun to build a content index, instead of a Web index, for every HTML page that exists.

With an update from Microsoft on the horizon, search marketers can expect to hear something similar from Bing.