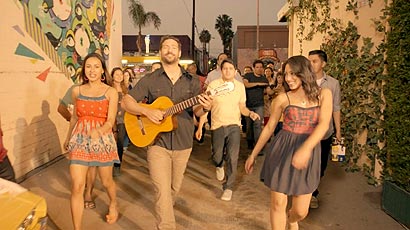 Both campaigns were created by La Comunidad, which is the agency of record for both brands.

The Corona Extra campaign is aimed at Hispanics ages 21-34. It is an evolution of the brand’s “Refresca Como Somos” (“Refreshes How We Are”) campaign that launched in April 2011. Modelo Especial’s campaign is themed “Descubre lo Especial” (“Discover What’s Special”).

The Corona Extra campaign includes a 60-second anthem TV spot, “Life.” The theme line is “Los Latinos Tenemos Algo” (“We Latinos Have Something Extra.”)  All spots in the campaign feature original music created by Grammy Award-winning artist Jorge Villamizar. The song celebrates the Latino spirit of “saber vivir,” or knowing how to live each moment to the fullest. Entitled “Todo lo que quieres es bailar” (“All you want to do is dance”), it will be available on iTunes in May.

All three TV spots in the campaign were shot in one continuous take. “Life,” the 60-second flagship spot, features seven heroes who represent the Corona Extra consumer walking through the street singing and playing the guitar.

“This campaign taps into what’s worth discovering about Modelo Especial, and those who drink it,” said John Alvarado, senior director, brand marketing for Crown Imports, exclusive U.S. importer of Modelo Especial, in a release. “The new creative is completely on target with our consumers and provides a platform from which to build on for years to come.”

All executions of the campaign play on the insight that the quality of Modelo Especial is something shared by those who drink it. The first TV spot in the campaign to launch, “Generoso” (“Generous”), introduces the protagonist, “Pepe,” whose friends describe his generous nature. Pepe chooses Modelo Especial because it’s a high-quality beer that reflects who he is.