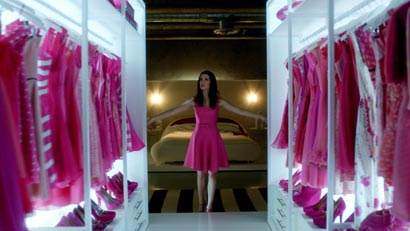 T-Mobile spokescharacter Carly, she of the magenta dresses and cheerful demeanor, is getting a makeover as the company moves toward a brand relaunch this fall.

“In any campaign, evolution is good from a creative standpoint. We felt this was a good time to step in and do something like this,” Peter DeLuca, senior vice president of brand, advertising and communications at T-Mobile, tells Marketing Daily. “We really needed to do something to get T-Mobile some [attention] right now.”

In a new set of commercials set to begin airing this week, Carly is shown going through her closet, discarding magenta dress after magenta dress before landing upon a black leather motorcycle suit, with magenta trim. She then heads out on the town on a motorcycle, signifying the network’s speed and technological savvy.

“It sets up the new personification of her as our brand representative,” DeLuca says. “It brings out our challenger spirit. We always knew we had a competitive edge, and this is meant to express that.”

The new television campaign will launch April 17 and run on all major TV networks during high-profile, prime-time programming, as well as through pre-roll on digital video sites such as YouTube and Hulu. Print elements will appear in national newspapers such as TheNew York Times. With this campaign, along with the relaunch expected in Q3 of this year, the company will spend around $200 million on marketing, according to a representative.

The current campaign, which will continue throughout the fall, is intended to re-establish T-Mobile as a viable challenger brand to AT&T, Sprint and Verizon Wireless, DeLuca says. Having spent a good portion of 2011 trying to secure a merger with AT&T (which was abandoned in December), T-Mobile is finding itself in the position of having to re-engage consumers, he says.

“Clearly 2012, is a rebuilding year,” DeLuca says. “There might have been some confusion among consumers as to what we stood for. And this gives the other side to T-Mobile, which is delivering on our network.”

A big part of the campaign’s near term will be positioning T-Mobile as a credible technological alternative to the other, larger carriers through its 4G network. Through the television campaign, T-Mobile aims to drive consumers to a dedicated Test Drive Web site where consumers can compare how long it takes to accomplish common tasks such as downloading an app or streaming a movie.

“We need to shore up the fact that we’re a nationwide 4G network,” DeLuca says. “It’s time to set the record straight. We really want people to know T-Mobile is here.”