Mitsubishi Hires A Temp So You Can Drive 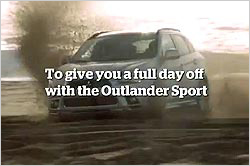 The way to throw a spear really far is to use an extension, which is kind of a lever that fits on the end of the weapon, so you can really wing it. Mitsubishi Motors North America has one of those. The automaker doesn't have a big media budget, but it tends to do campaigns that grab attention because they go to extremes in one way or another.

The latest such effort from the Cypress, Calif. company is “Temp Drive,” wherein people get to take a break from work and spend the day à la Ferris Bueller with the new 2012 Outlander Sport (starting at $18,795).

The wacky part of this is that consumers are to go to mitsubishicars.com/tempdrive to apply for a temp to replace them at their job for one day.

And it gets a little stranger. The temps who will perform the duties for the three people Mitzu chooses for the "play day" will not come from Kelly Girl. Instead, they will include an opera singer, magician, deejay, librarian, meteorologist and rocket scientist.

The effort is via agency of record 180LA, which also did the effort that put Mitsubishi Outlanders on the infamous Bolivian Road of Death, among other places. The agency was also behind Mitsubishi Motors’ “Live Drive,” a pure online test drive where consumers could robotically drive a real Mitsubishi crossover.

The marketing campaign includes television, digital, social media and public relations. The television spot highlights the features and capabilities of the Outlander Sport that the consumer discovers during his day off. All campaign elements lead consumers to the Web site to sign up. Digital is being handled by Possible Worldwide.