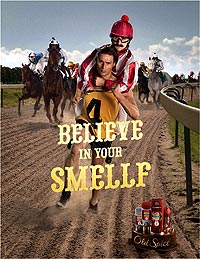 Old Spice is back with more advertising antics and this time there's even a DeLorean involved. The campaign, "Believe in Your Smellf" focuses on a new product in the Red Zone line of body wash and spray, suggests that "the sweet smell" of success is what really matters.

Extending the "Smell is Power" campaign that ran through March, the new push touts the new Champion line of deodorant/antiperspirant, body wash and body spray products. The Old Spice Red Zone line -- which is intended to appeal to guys who like to spend time grooming -- comprises antiperspirant, deodorant and body wash products in a variety of scents and formulas. In addition to Champion, there's After Hours, Aqua Reef, Pure Sport, Swagger and new Champion and Danger Zone.

The Champion campaign includes several outlandish TV spots about an uber successful guy who appears on the beach in a DeLorean "environmentally responsible sports sedan" made of sand, gives the heave-ho to actress Heather Graham (to her chagrin), and wins a horse race, by actually running in the race himself with the jockey on his back.

A spokesperson for the P&G division said there are three spots -- with the lead one, "I can do anything," running with 45- and 30-second versions; a 15-second spot just focused on the DeLorean; and another 15-second ad. The Old Spice campaign typically goes to humor and sports-related programming -- e.g., Comedy Central and pro football, the spokesperson noted.

While Isaiah Mustafa became the face of the revived Old Spice in 2010 when he starred in "The Man Your Man Could Smell Like" campaign, the company uses a lot of characters these days for different products. The "Smell is Power" campaign featured actor and former NFL player Terry Crews, who started doing Old Spice ads in 2010 for "Odor Blocker Body Wash." Mustafa was featured in the brand's holiday-themed campaign in December.

Old Spice had been in NASCAR, as a sponsor of Tony Stewart for a decade up until a couple of years ago.