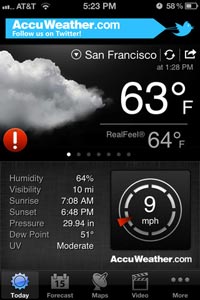 AccuWeather has struck a partnership with Amobee to use its mobile platform for ad-serving, campaign management and ad targeting for inventory worldwide.

Under the agreement, AccuWeather will use Amobee’s Pulse for Publishers solution to power advertising across its mobile Web sites, as well as its smartphone and tablet apps for iOS, Android and other mobile operating systems.

The company estimates the global audience for its mobile apps at half a billion devices, driven by deals with the 10 largest device manufacturers. Many sell their handsets pre-loaded with the main AccuWeather app. Underscoring the growth of mobile data use, the weather brand says it fulfills 2.2 billion data requests from mobile devices worldwide, triple the amount at the start of 2011.

Jim Candor, executive vice president/chief business officer for AccuWeather, said the pact with Amobee would help the company provide large brands and agencies with the tools to run campaigns across its mobile properties as its global inventory expands, especially in the Asia-Pacific region.

Last month, Amobee was acquired by Singapore-based mobile phone and services provider SingTel for $321 million. Through the deal, SingTel aims to expand into the mobile marketing arena, especially in the area of one-to-one connections between brands and consumers.

In a recent interview, Amobee COO Mark Strecker said the company this year notched its first $10 million ad commitment with a global brand he declined to identify. However, Amobee has publicly cited eBay, Zynga, Skype, Barnes & Noble and Google among its clients. It most recently won the Mobile Advertising & Marketing Agency of the Year Award at the GSMA Mobile World Congress.

Through its Pulse for Publishers platform, Amobee provides a full suite of services for monetizing apps and Web sites from ad-serving to campaign optimization to analytics and reporting. It also offers real-time bidding and mediation for unsold inventory.

For its part, AccuWeather already provides marketers a wealth of weather/location-related targeting options. The 100-plus attributes range from daily high and low temperatures, the “Dust and Dander” Index (yes, it exists), the Flu Index and jogging- and skiing-related forecasts.