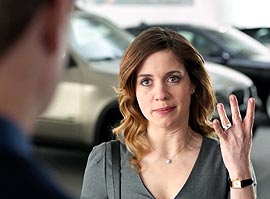 Last year, AAA famously determined that the average cost of yearly auto ownership has reached $8,776 per year. BMW is promoting its owner service policy, Ultimate Service, with two 30-second spots that feature consumers amazed at how little it costs to maintain a BMW with the automaker’s no-cost maintenance program. The coverage on all new BMWs is for the first 50,000 miles or four years of ownership, and includes the BMW Assist Safety Plan, roadside assistance and warranty.

The campaign is from New York-based Kirshenbaum, Bond, Senecal and Partners (KBS+), which won the account last summer, replacing Austin, Texas-based GSD&M. The campaign shows fictive customers in humorous ads where they do not believe a service advisor when told their maintenance is no cost, and mistakenly think they are being given special treatment.

The first ad shows a woman being told the work on her car is free of charge. She thinks the guy is just flirting with her. So as she tries to explain that she's married, the representative clarifies that no-cost maintenance is standard for all new BMW owners. The second ad has a customer assuming he is being given special treatment and trying to repay the representative by casually slipping tickets to a sports event into his shirt pocket -- which isn’t there -- leading to an awkward moment.

Said Dan Creed, VP marketing, BMW of North America, the ads “give us the opportunity to tell that story in a fun and memorable way.”

The Woodcliff Lake, N.J.-based arm of BMW is extending the effort with a series of online videos, similar to a series of digital shorts the automaker used to support the new 3 Series. The automaker says those proved popular enough to get picked up by dealer groups for their television ad buys during Super Bowl XLVI. The company will start running the Ultimate Service digital shorts next month with a second group of videos to launch in July via social media channels. The video ads are similar in setup to the TV spots, with an incredulous customer and a service person continuing to elaborate features of the coverage plan.

A BMW spokesperson tells Marketing Daily that the campaign is about setting the automaker apart in the after-market service and care department. She says the spots were designed for a national media placement, but while it will definitely run in dealer group regional buys, the company hasn't determined whether to drop the ads into the national media cycle.

When it comes to how much service a vehicle might actually need, J.D. Power and Associates' 2012 U.S. Vehicle Dependability Study put Lexus number one among all brands, luxury or otherwise in the number of problems per vehicle over three years of ownership. Porsche was second and Cadillac came in third. Mercedes-Benz came in at number six; Lincoln was seventh; Audi was 15th and BMW was in 20th place. Only Jaguar and Infiniti lagged BMW among luxury brands in the study, which measures 2009 model-year vehicles.

Tom Libby, lead analyst on forecasting with Polk, says the luxury market has become so competitive it is no surprise that automakers in the segment are finding points of differentiation. "BMW is in a very competitive situation with Mercedes and Lexus, where they are almost one-to-one in sales. They are likely looking for a leg up," he says.

Jesse Toprak, VP of industry analysis at TrueCar.com, says that BMW has first-mover status in the luxury maintenance and warranty area, but that nowadays it is in the middle of the pack when it comes to the breadth of its offering. "Ten years ago, they were clearly sort of the front of the pack in terms of vehicle maintenance, but [in TrueCar's warranty ranking] they are in the middle in terms of basic warranty and powertrain," he says, adding that Hyundai leads overall.

Toprak tells Marketing Daily that the goal of a campaign like this is brand enhancement aimed principally at entry buyers considering the 3-Series who are a lot more focused on value than, say, a person buying a 7-Series premium car. "They are talking to  consumers who think they perhaps can't afford a 3-Series."